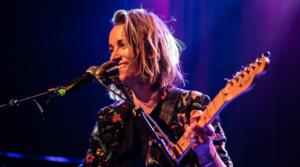 Holly Miranda grew up between Detroit and Nashville, two music towns that would influence her own journey in a very profound way. She began playing piano at the age of six, taught herself guitar at fourteen and moved to New York at sixteen to start her professional career. For over twenty years, Holly has been performing, writing and producing with some of the best talent in the business. She has performed with the likes of Karen O, Lou Reed, The XX, and Lesley Gore. She released two records with her band The Jealous Girlfriends and has co- written and produced a mass of other projects.