This Full Monty is Full of Laughter, Fun… and Truth 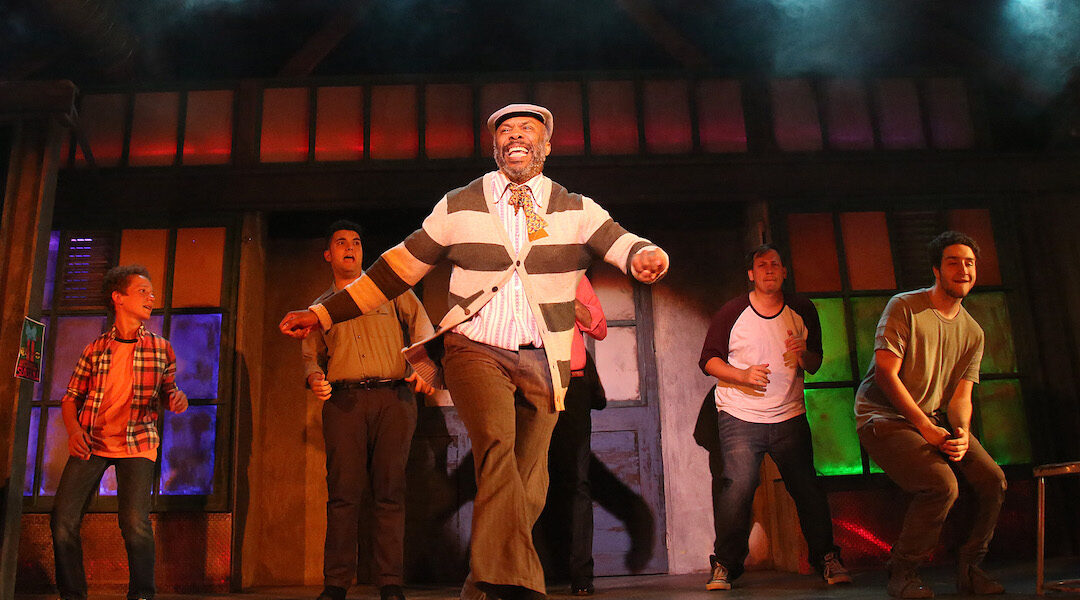 Cape Rep has done it again, brought a fabulous musical to the stage that has audiences roaring with laughter one moment and nodding pensively the next. The Full Monty, expertly directed and choreographed by Dani Davis, is a triumph: hysterically funny and emotionally touching all at once.

Based on the somewhat-darker 1997 film set in England, Terrence McNally’s book for this musical is set instead in Buffalo, NY, but could be in any company town where once-thriving industries have reached the end of their tenability. When the main factory in town shuts down and only menial work can be found, the situation becomes dire for men unaccustomed to not working hard—and especially to having their wives support them.

Accidentally happening upon a Chippendale’s show (with an absolutely hysterical and skillful bathroom scene), friends Jerry (Sam Nudler) and Dave (Cam Torres) figure that anything a gay man can do, a “real” (read: straight) man can do just as well, physiques be damned.

Jerry is a cocky divorced dad whose ex-wife is about to take away custody of their son if he doesn’t start paying child support. Dave is a big guy burying anxiety in junk food while growing increasingly apart from his wife. Their plan? Go the “full Monty” and cash in on one night of bawdiness. Their main problem is that two men does not a strip show make, so they need some help. 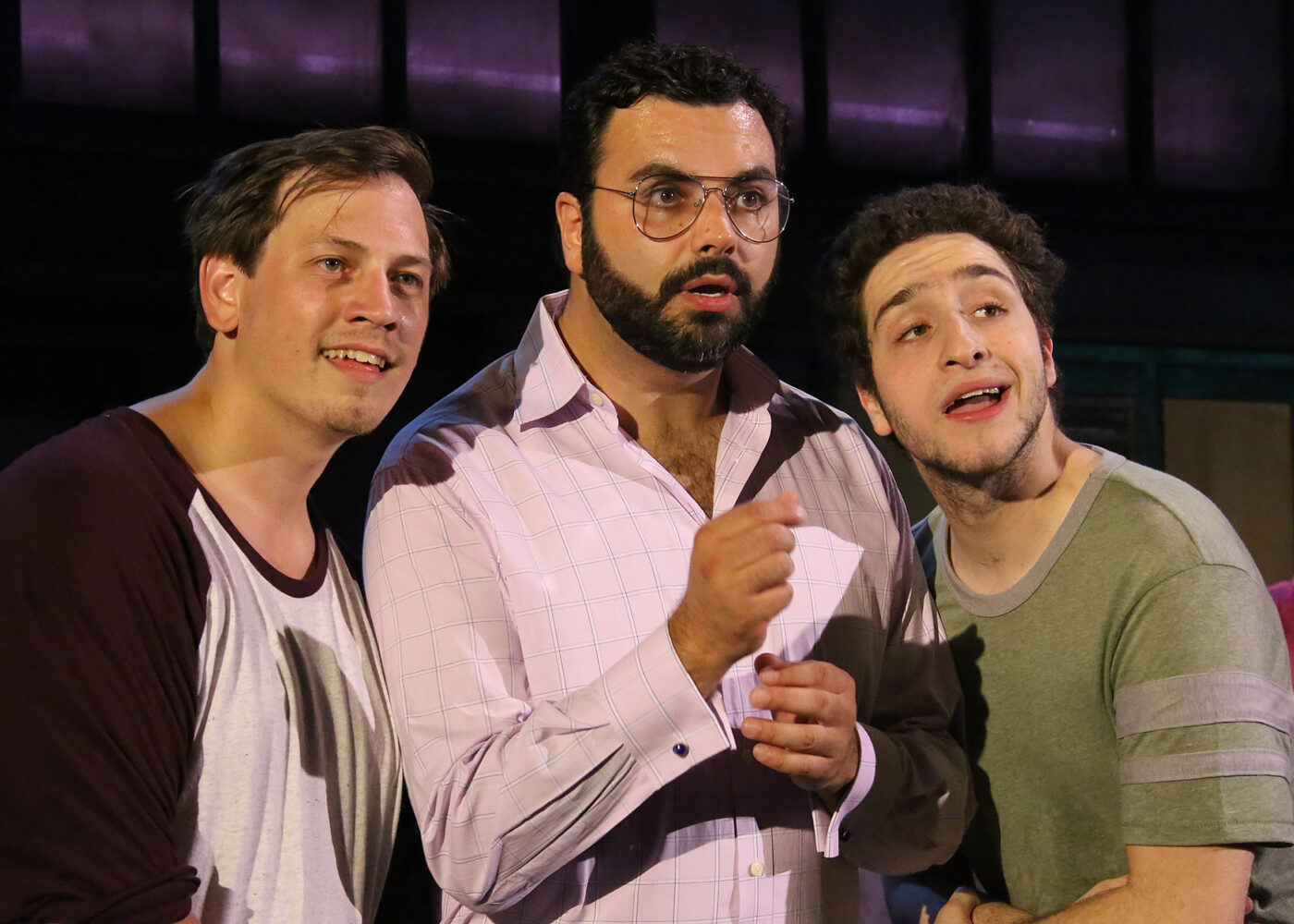 Roping in another four men, including their former boss Harold (Anthony Teixeira) to join them, they are determined not to let imperfect bodies, advanced ages, or lack of dance ability hold them back. Enter Jeanette Burmeister (Melissa Becker), a past-her-own-prime showbiz gal who’s going to whip them into shape—or at least into some approximation thereof. She and Harold mastermind auditions for the rest of the troupe, to the delight of the audience as Horse (Richard E. Waits) pulls off a limping Funky Chicken dance and athletic Ethan (Ian Shain) reveals his own not-very-hidden talent. Rounding out the crew is the depressed Malcolm (Noah Pelty), suicidal and living with a demanding mother. One of the most touching aspects of the play will be the gently developing romance between Malcolm and Ethan.

And then there are the women: brash, vulnerable, blue-collar girls who are making the best of supporting their families and dealing with their husbands’ problems: Dave’s wife Georgie (Ashlyn Inman), Jerry’s divorced wife Pam (Kelly Plescia), Harold’s wife Vicki (Jess Andra), Estelle (Sara Plunkett), Molly (Meghan Magrath), and Joanie (Isabelle Archer). As an ensemble they’re powerful and energetic—the choreography for the women’s scenes is particularly excellent—while as individuals they convey strength and depth.

Though the central conceit of the play is the adventure of getting from unemployed steelworkers to polished performers, The Full Monty isn’t about raunchiness. It explores male anxiety, negative body images, divorce, friendship, despair, and the pain of unemployment, and turns the issue of the male gaze on women around, showing the absurdity of having one’s body constantly judged and evaluated. It’s a nice reversal of the usual male objectification of bodies. 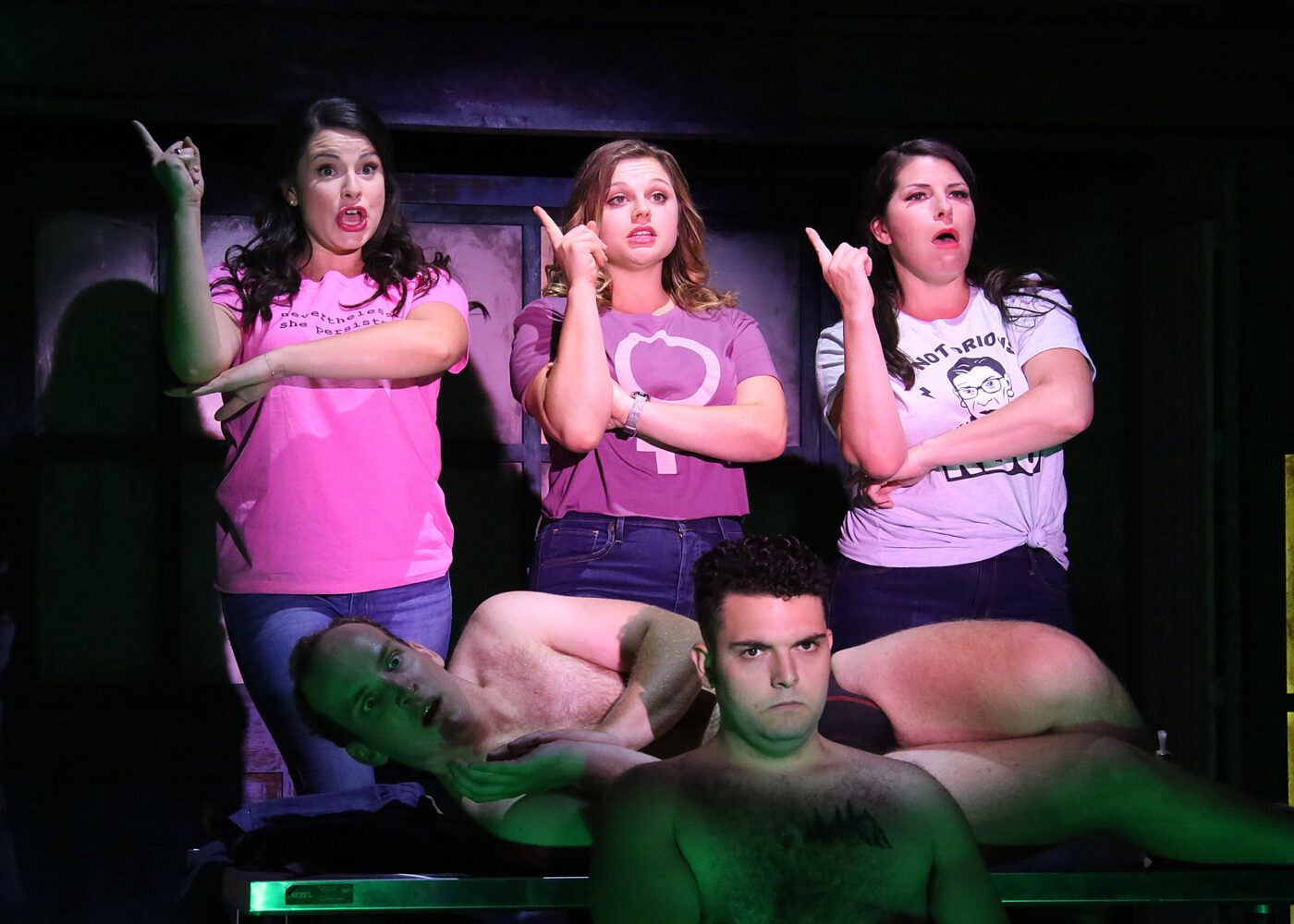 There are poignant ballads, such as Jerry’s tender song to his son, Breeze Off the River, and Malcolm and Ethan’s You Walk With Me; but there’s a lot of just plain fun (along with a touch of irony) in It’s a Woman’s World and Big Black Man. I can’t say enough about the voices assembled on this stage. Peter Hodgson’s musical direction seems to have brought out the best in all these performers; voices blend and complement each other, belting out ensemble numbers before wafting with the delicacy of a feather in ballads. Pelty’s voice, in particular, is achingly beautiful.

No review would be complete without mentioning quick-change artist Ryan Sheehan, who played about nine different characters, often in quick succession, and managed to give them each his own persona with never a hair out of place.

The Full Monty is the perfect summer show: you’ll leave laughing, humming, and feeling positive about the world and the people who live in it.