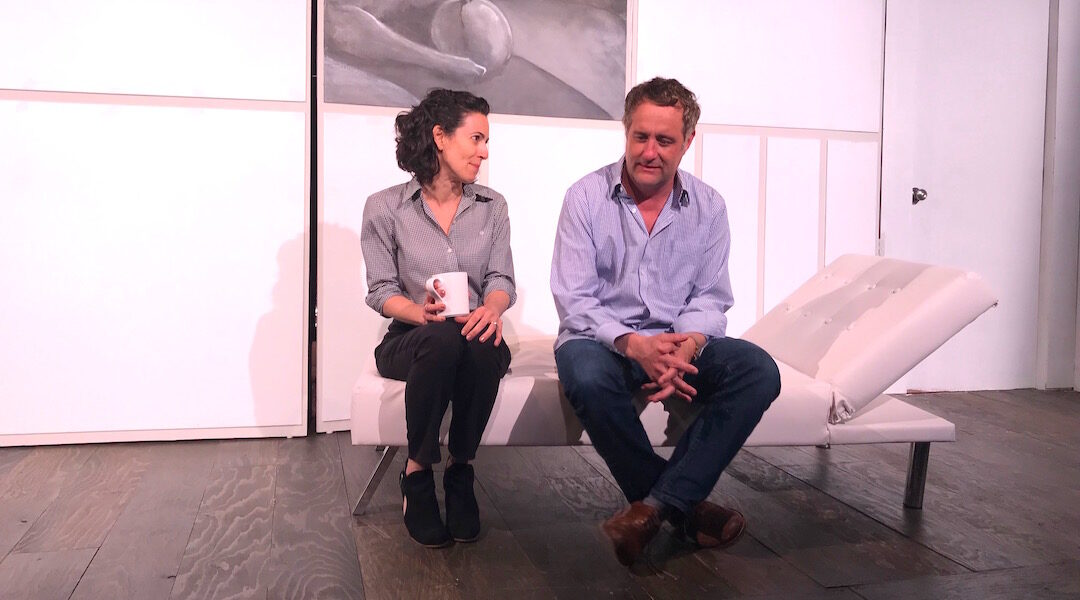 Okay, I just have to start with the program: there’s a credit given for “nail design.”

All will be revealed, and this is just one of the delightful surprises awaiting audiences coming to see The Hermitage at Harbor Stage Company. It’s a ponderous title, with echoes of Chekhov, and the reality couldn’t be further away from Russian angst: this is a play that will make you laugh out loud, not once, but pretty much with every line. We needed a smart, clever, intelligent comedy, and playwright Carrie Bennet and director Jonathan Fielding more than deliver.

Martin (Robert Kropf) and Jennet (Eve Kagan) are a wealthy, accomplished couple who have just spent a great deal of time—they waited in a hotel for nine months—and money creating what they believe to be the home of their dreams, taking down an old farmhouse to build something modern and spectacular in its place. They enter the play talking about décor: “Who has leather countertops?” demands Martin, but Jennet reassures him: “It’s perfect.” Still, Martin has his doubts: it’s missing something. A Japanese tea house? A farm? A garage? A theater? Then… what? What will make their perfect new home even more perfect?

What? “Something to come upon on walks,” says an excited Martin. “We have people over. What is there for them to come upon?”

Martin is very enthusiastic about the concept of a hermitage, complete with resident hermit, and begins the interview process at once. He’s quite taken with Nathaniel (Alex Pollock), a former psychiatric patient who lives without “a care or a nail clipper in the world.” Jennet is less enthused but both are still committed to finding the perfect hermit to “come upon” on their grounds. 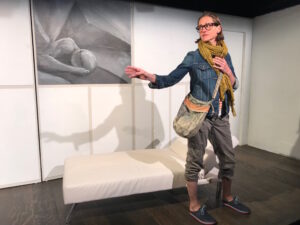 Jennet finds another option: her friend Olivia (Brenda Withers), a penniless painter, is being evicted. Why wouldn’t her best friend be the perfect hermit? Olivia’s not so sure but is persuaded by the thought of being paid to live in a charming hermitage and paint. “You could be my patron,” she tells Jennet. “Not a patron,” Jennet corrects, “a hermit-master!”

Problems arise the moment Olivia moves in. “I didn’t think my hermit would have so much stuff,” says Jennet, while Olivia, seeing no lock on the door, wishes she “didn’t watch so much Lifetime.” But both agree it’s beautiful. “It looks just like the farmhouse you tore down,” says Olivia.

Even in a hermitage, life gets complicated. Olivia is trying to paint when Martin walks in the door. “Look what I’ve come upon!” he exclaims. “A hermit—in your natural habitat!” He won’t let her speak, tries to hide her box of tampons, and wonders if she shouldn’t have a straw bed. After both Martin and Jennet visit Olivia, the excitement wanes and they decide that “coming upon her isn’t as exciting as I thought it would be. It didn’t have that gravitas I was looking for.” And Olivia paints her anger, seething at her lack of privacy and nonsensical restrictions.

The play accelerates from there, as all three explore the limitations of the conceit they’ve created for themselves. Eventually Martin’s brother Hugh (Robin Bloodworth) visits, the two men get roaring drunk and “come upon” Olivia while she’s asleep, and the fiction blows up.

Harbor Stage Company has delivered an antidote to current affairs—a brilliant, funny, thoughtful, and ultimately feel-good night at the theatre. Everything works perfectly together, with a clever set by Seancolin Hankins and interesting sound work by Joe Kenehan. 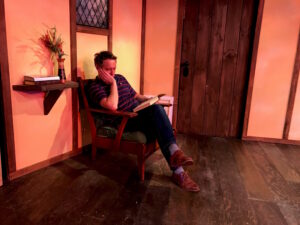 Founding members Kropf and Withers are unfailingly pitch-perfect—it’s worth an evening at Harbor Stage just to watch Kropf’s neurotic gesturing and muttering, or Withers’ animated facial expressions—and come through here in spades. Harbor Stage regular Bloodworth borders on seriously disturbing, but stays just this side of that border. Foster exudes an enigmatic charm transcending his off-putting appearance. And the real “discovery” for Cape audiences is Kagan, who is bright, funny, speaks as much with her body as her words, and infuses her superficially superficial character with unexplored depths.

That’s Barrett’s strength as well. She infuses layers into what could be just an amusing comedy, hinting at unresolved work issues, family issues, religious issues, and ultimately at what people want out of life and the meaning of home. Not bad for a 90-minute production!

Harbor Stage has begun its eighth year with an unforgettable piece whose time is definitely now, a collaboration that will lift audiences out of the present and give them hope that we might all, eventually, find our way home. If we’re to believe Harbor Stage, then we most assuredly shall.

THE HERMITAGE is onstage at Harbor Stage Company from June 13 to July 20, 2019. More information at harborstage.org.