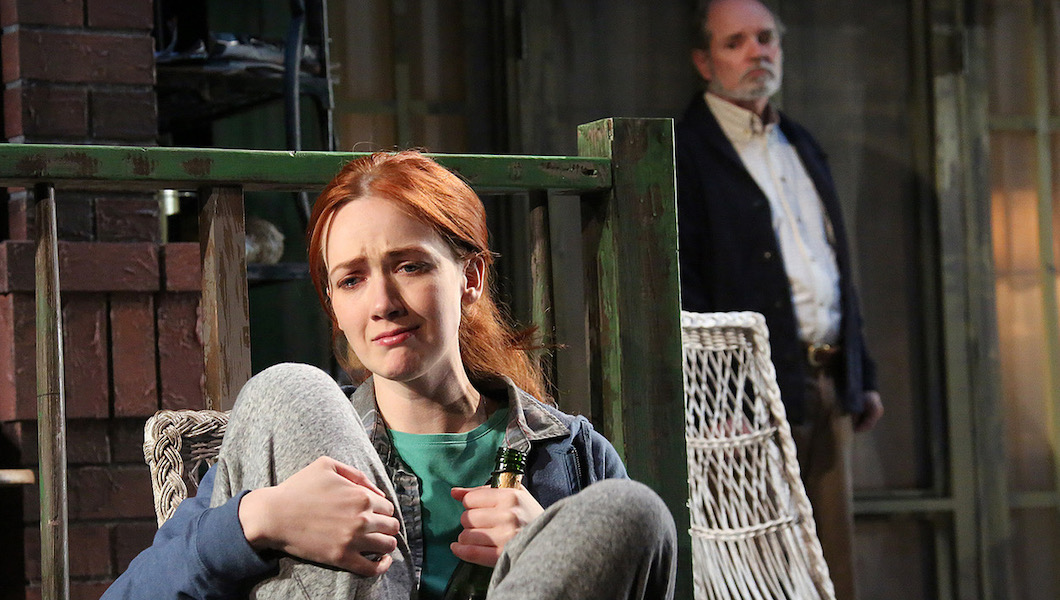 David Auburn’s Proof premiered on Broadway in October 2000, earning the Drama Desk Award, the Pulitzer Prize, and the Tony Award for Best Play. That’s a heavy reputation to carry moving forward, a parallel—if it’s not forcing the metaphor too far—with another reputation, that of a brilliant and revered dead parent and how to move forward out of that shadow. As Cape Rep’s first production of the season, Proof sets a high bar for the rest to reach.

The play revolves around Catherine, played by Monica Giordano, who has lived her entire life in the same house as her father Robert (Mark S. Cartier), a brilliant mathematician who in his last years declined into dementia and who has now recently died. She isn’t just mourning his loss, but also her own: caring for him kept her from completing the undergraduate studies she’d started, and she’s now left with nothing but his worthless books of manic meaningless scribbles. The intensity of the relationship is over and she is depressed and exhausted… and unable to formulate a future for herself.

Two other characters are, however, well aware of looking to the future. Hal (Wes Williams, strongly reminiscent of a young Matt Damon) is one of Robert’s protégés, filled with admiration for the man’s genius and not able to confront the mental health issues that accompanied it. He’s ensconced himself in the attic where he is poring over Robert’s notes, trying to find one last brilliant contribution to the field, something to help him move forward in his own career in academia. And Catherine’s sister Claire (Holly Erin McCarthy) comes from New York for the funeral… and, Catherine learns to her dismay, to sell the house and take Catherine back with her. It is through the sisters’ interactions that the audience learns Catherine may have inherited more than her mathematical brilliance from her father.

Director Maura Hanlon’s genius with this play is in bringing a pronounced physicality to the emotions being battered about. Williams’ Hal is socially awkward on the surface, but charmingly self-deprecating about it, indicating there’s more than just the geek trope going on here. Giordano is physically perfect for the part of Catherine: she moves around the stage in a languorous, loose-limbed way and curls herself into furniture. McCarthy’s Claire is imposing and loud, shattering the air around her, and Cartier takes the cold father and gives him warmth, albeit through mania.

Giordano and Williams are simply brilliant together, taking Auburn’s quick repartee and running with it. They feed off each other’s lines, each one daring the other to press the edge of the envelope further still. As Catherine becomes more scary, Hal becomes more disappointing; when Hal is the most earnest, Catherine is the most dismissive. Proof has seen some extraordinary actors play these characters, both onstage and onscreen, and it’s difficult to imagine any of them outperforming Williams and Giordano. 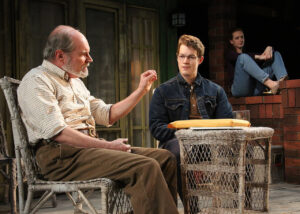 Hanlon builds dramatic tension with every scene, leading the audience into deeper revelations, layering one atop the other until it feels the very set will finally have to uncoil and explode. Every detail is perfect, down to set designer Ryan McGettigan’s dead leaves strewn around, a surface nod to Robert’s monologue about Chicago in September but also reminding audiences that some things aren’t meant to be carried on into the future.

A mathematical proof builds on a concept until it “works.” Cape Rep’s Proof doesn’t need to build: it works from the start, an emotionally compelling drama that’s just mysterious enough to leave audiences second-guessing what they thought they saw.

Images Bob Tucker/Focalpoint Studio, Proof is playing at Cape Rep Theatre in Brewster from May 8 to June 2, 2019. For more information, visit the website.