A Blockbuster of a Parody 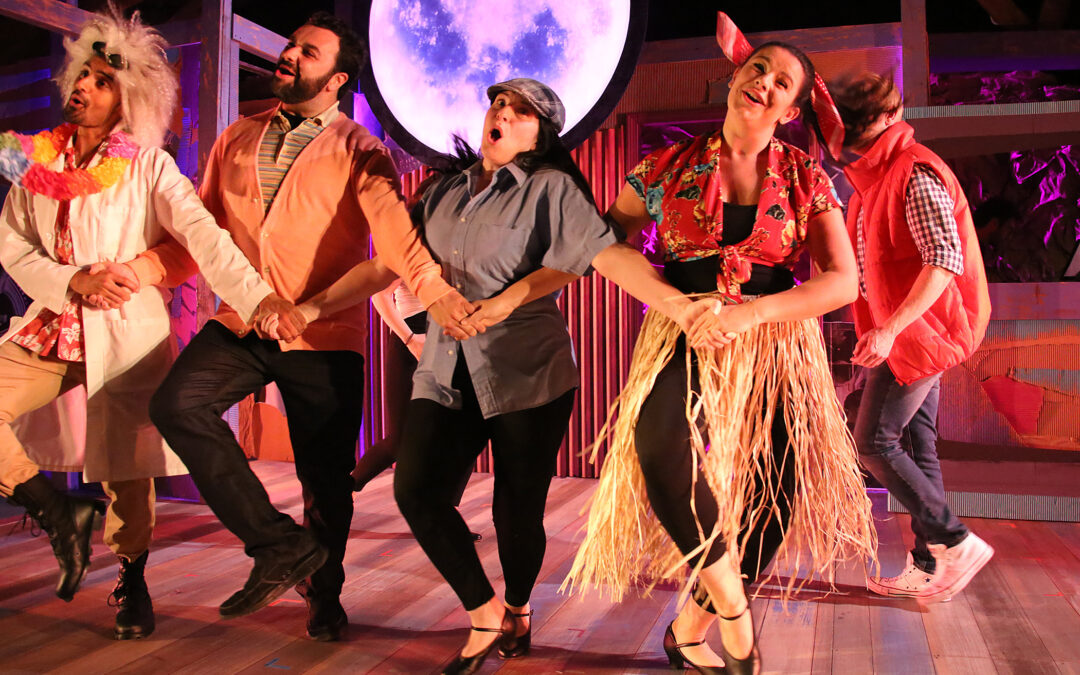 What if, as an avid movie-watcher, you were suddenly transformed into Marty McFly from Back to the Future? Feel a little disoriented? Then hold on to your popcorn, because that’s just the beginning of what happens to the first of Owain Rhys Davies’ characters in The Unauthorized Musical Parody of Summer Blockbusters, now playing at the Cape Rep Theatre in Brewster. 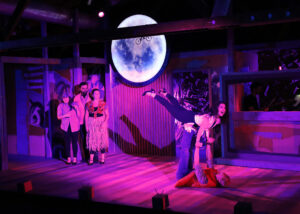 The two-act musical takes audiences through a number of past summer hits, from The Matrix to Jurassic Park, from Dirty Dancing to Titanic, from Jaws to—what else?—Back to the Future, and it’s clear that the cast is having great fun (“the time of their lives”?) in the process. They make sure the audience does, too, so beware of sitting in the front row unless you’re up for a little participation!

The storyline is that Marty’s wife Jen (Caitlin Gallogly) has been sucked into movie-land (“You’re in Netflix, baby!”) where she takes on the lives of various film characters; he has to rescue her and bring her back—with the help, naturally, of wild-haired Doc Brown (Djon Alexander) and the participation of three shapeshifting supporting movie actors, played by Kelly Plescia, Jess Andra, and Anthony Teixeira.

What ensues is hilarious, as each movie is lampooned and Marty comes closer and closer to either rescuing Jen or losing her into the silver screen forever. It’s not all comedy, however: there’s some seriously great singing and the choreography is tight, creative, and provides impeccable pacing. It’s a pleasure to see Teixeira back at Cape Rep and morphing seamlessly from sex symbol to buffoon, and Gallogly’s voice reaches shiver-up-your-spine heights. As an ensemble, the cast really has it all down. The second act in particular has terrific timing and super-high energy and is a delight to watch. 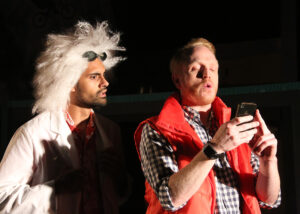 My only criticisms have to do with the material itself, not its performance. It’s unclear whether a younger audience would find the production as funny as one well acquainted with the movies being parodied—these go back into the 1970s and 80s, after all; my theatre companion hadn’t seen Dirty Dancing, for example, and was a little bewildered by its scene. That might call for either an update of the production—or a careful choice of venues. It was also disconcerting to see characters sometimes referred to by the name of the actor in question—Patrick Swayze, Jeff Goldblum—and sometimes by the name of the movie character—Rose and Quint, for example. There’s enough great stuff going on onstage, however, that these problems can be overlooked; this is truly howlingly funny.

A special treat is found in the printed program: That List of Songs You See in Every Program of Musicals. Don’t miss it.

Photos by Bob Tucker/Focalpoint Studio. The Unauthorized Musical Parody of Summer Blockbusters is at Cape Rep Theatre, Brewster at 7 pm Tuesdays through Thursdays, 8 pm Fridays and Saturdays and 2 pm Sundays through July 21.