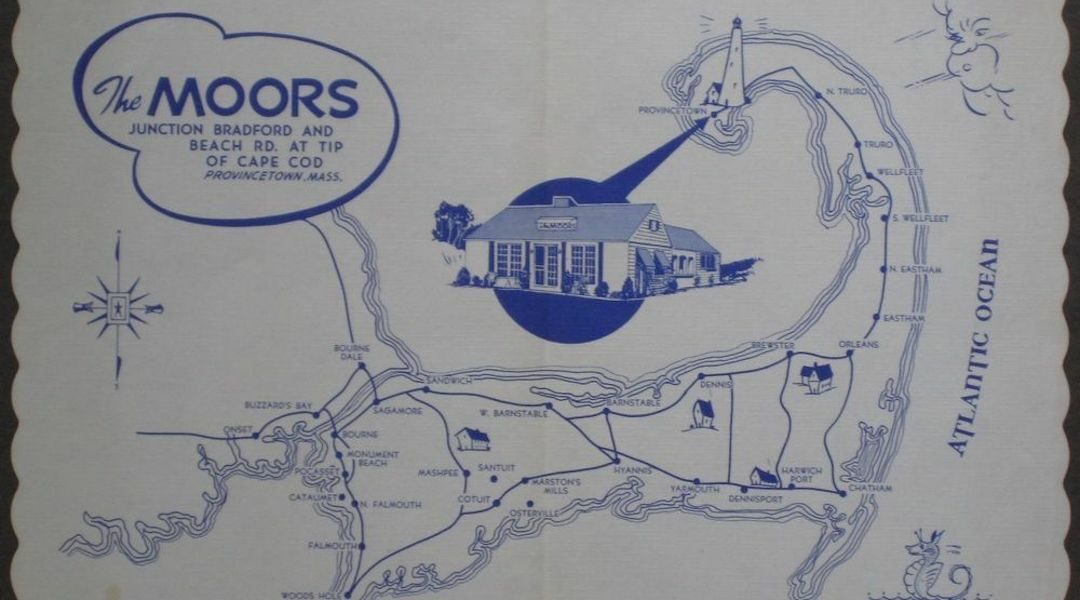 Today it’s AWOL, part of the chain of Lark Hotels, but in the 1950s at the end of Bradford Street Extension you’d have found The Moors Motel and The Moors Restaurant. The promotional postcard for the motel noted it was “Provincetown’s nicest, overlooking the beautiful moors. Pool—private telephones and television, piped in music. Continental breakfast in season—famous Moors Restaurant adjacent.”

The Moors started, ironically enough, at the other end of town in a building known as The Shed, adjacent to today’s Lobster Pot. In 1939 owners Maline and Naomi Costa made a bold move, taking the restaurant and its Portguese fare to a remote part of town by the breakwater. The risk paid off.

Though the brochures talked about whaling days, it was the skull-and-crossbones motif as well as the whaling paraphanalia that dominated the room, where flickering candles on every table set the tone. The Moors’ signature recipes included cod cakes, “porco em pau,” and lemon bread pudding, all topped off with a glass of vintage port. Over the years the restaurant expanded its seating capacity, enlarged its menu, and gathered a loyal clientele of locals and tourists.

When a devastating fire in 1956 reduced the establishment to smoldering rubble, friends, area carpenters, and tradesmen all pitched in to help the Costas rebuild and reopen in near-record time.

Beginning in the late 1950s and continuing into the 1980s, as more and more dining and entertainment establishments opened and competed for clientele, The Moors adjusted to suit the times, offering a jazz brunch and featuring live music and entertainment, notably renowned singer and pianist Lenny Grandchamp, who dominated the Smuggler’s Lounge for many years.

In Howard Mitchum’s classic Provincetown Seafood Cookbook, the renowned chef writes, “Portuguese cooks are, without a doubt, the most fantastically inarticulate cooks in the world. No Portuguese that I know of has ever written down a recipe because they have no measurements of quantities or standards of cooking times (…) When you give it a long hard look, you can see that the mystique of Portuguese cozinha is not mysterious at all. These people simply put their soul into their cooking, and they enjoy the eating of it. What could be ordinary food takes on a magic aura. … And it helps make Provincetown one of the best little towns in the western hemisphere.”

The restaurant closed in 1998; the motel lived on in a second incarnation as the Inn at the Moors until 2018. In 2005 the Boston Globe described the end of the restaurant:

Built in 1939, the Moors, owned and run by the Costa family, became known for its nightly sing-alongs, jazz brunches, and live entertainment. It was by locals, for locals, and for this it was loved. But when Mylan Costa—tired of decades in the restaurant business—sold it in 1998, it did not take long for it to be demolished. The site is now a complex of eight condominiums called the Village at the Moors.

“The condo-ization of Provincetown is hurting it,” said Costa, who lives in North Eastham. “I think it is becoming another Nantucket. Nantucket’s nice. Believe me. It’s a nice place. But it’s definitely changing the makeup of the town. It’s not a funky village anymore. That’s gone forever. It’s a commercial product now.”