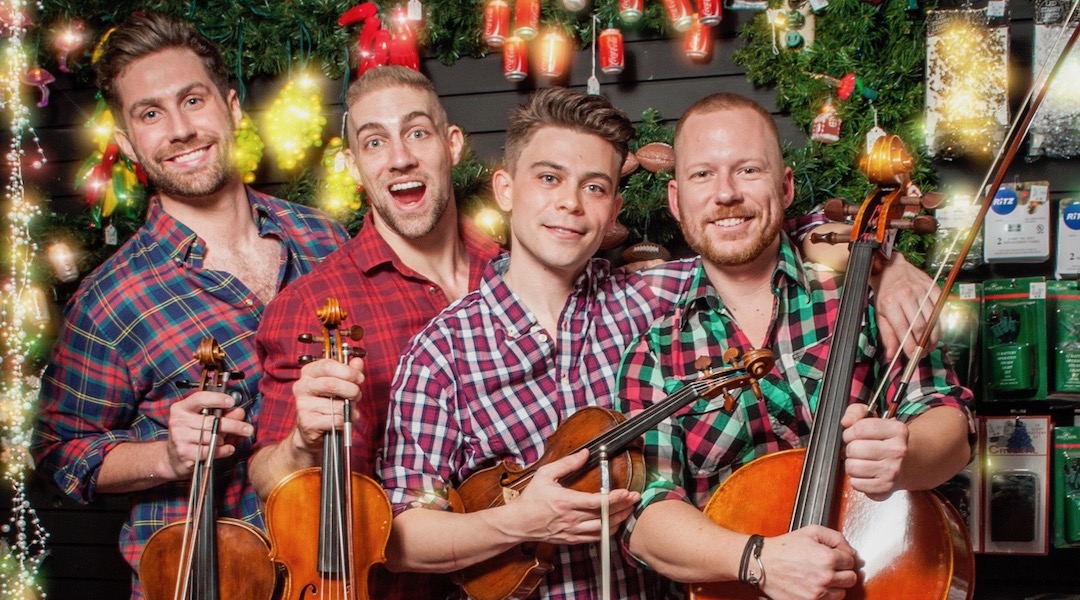 Well-Strung, the singing string quartet that mixes classical with pop music and got its start in Ptown, will be back on December 29 for one show only at Town Hall.

In advance of the show, ptownie caught up with Daniel Shevlin, cellist, for a chat.

1) Tell us a little about your background before joining Well-Strung.

Before Well-Strung, I performed mostly as an actor in New York City and also in Denver, where I had been living and working for about two years at the time Well-Strung was formed. I would take cello gigs on the side or if whatever show I was cast in called for a cellist, such as the studio 54 version of “Cabaret” that utilizes actor-musicians or even in an off-Broadway production of Edward Albee’s “The Sandbox” which required a cellist onstage for the duration of the play.

2) What is it you love about the cello?

The tone of the instrument itself, the great repertoire written for it, and the versatility with which it can be used across different genres of music.  Also, no one ever says: “Ew- you play cello? I hate the cello.” Seriously.

3) You play with a great deal of intensity. Where does that come from?

I’m not sure, I think part of it comes with the showmanship of what we do onstage, and the other part is just sometimes you have to move and play a certain way to get that sound and expression out there the way you want it to be. .

4) We’re glad you’re coming back to Provincetown for the holidays. What is special for you about performing here?

It’s always a bit of a homecoming for us, since it is the place we really got our first show up and running back in the summer of 2012. And it’s always nice to feel like you’re coming back to your friends and family and just a wonderful community that really helped get us started.

5) What would you be doing today if you weren’t playing with Well-Strung?

Who knows? Might still be living in Denver. Likely I’d have still continued on the actor-musician path. Maybe I’d have a 9 to 5. Maybe I’d be married. Maybe I’d have given up cello and become a snowboarder. Well, ok, maybe not that last bit…

6) You’ve been together for some time now. How have the dynamics within the quartet changed?

We’ve been together almost 8 years now, but we’re still the same people at heart. And we all know each other super well like family. The dynamic hasn’t changed but if anything, I think we’ve certainly learned how to better manage operating both as a group as well as having our own separate and individual lives.

7) What would you like to tell Ptown that I haven’t asked?

Just that we’re more than thrilled to be back and hope you’ll come out and join us as we say bye to 2019 and welcome in a new decade. OMG we’ll be entering “The Twenties”! Can you believe it? Will they be as roaring as last century’s? I guess we’ll see!