A Glimpse of Switzerland in the Middle of Provincetown 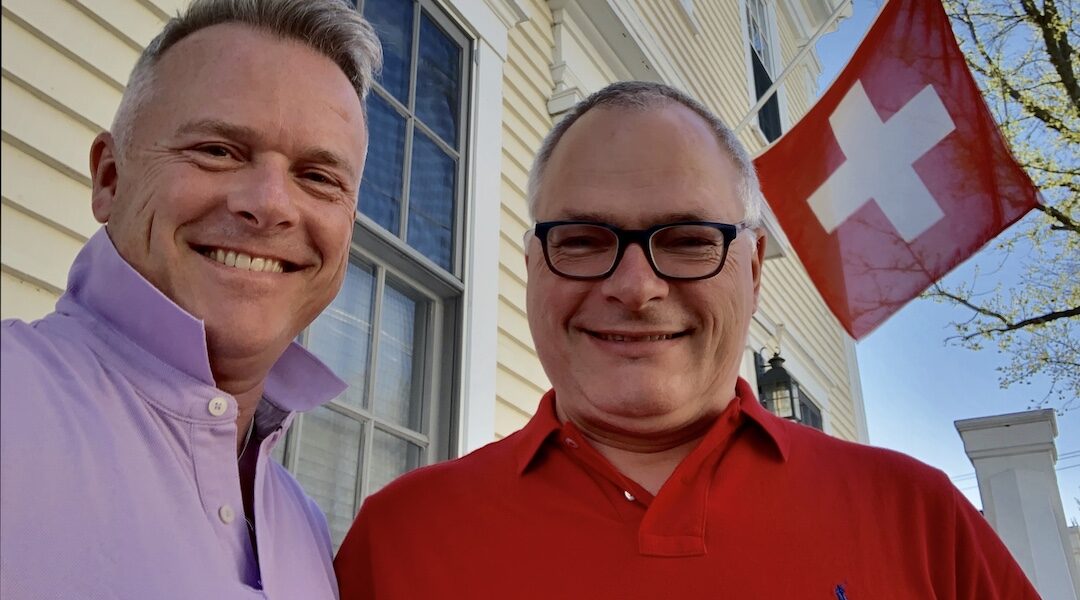 That’s largely because of what owners Daniel Judas and Dan Luethi bring to the table: they’re Swiss—and all those stereotypes about Swiss hospitality? They’re true!

“We’re proud of being Swiss,” admits Judas. “We’re open-minded; Switzerland has done very well over the centuries. The Red Cross was founded there; the United Nations was founded there.” And the hospitality? He smiles. “’Swissness’ is a term used to describe the respect and popularity Swiss goods and services enjoy worldwide. The word is synonymous with reliability, excellence and precision. In short, it is Switzerland’s unique branding. When we combine all the above factors, we have the ideal basis for a great hospitality experience.”

Luethi is more prosaic about what it means to be Swiss. “Clean!” he exclaims. “We’re stubborn and on the point. We notice things that annoy us and want to put them right.”

The couple comes from the same town in Switzerland, headquarters of the “Watch Valley” where the world’s most expensive and iconic watches are designed and manufactured. They still own a condo in the valley and spend their winters there, overseeing the inn from afar and skiing when they have time; Judas’ work takes him on business trips, but they’re always happy to return to their home base.

So… how did they get from the mountains of Switzerland to the beaches of Massachusetts?

In 1999 the couple was on a road trip from New York to Nova Scotia and stopped off almost by accident in Ptown. “We decided to check it out,” says Luethi. “It was the middle of the summer with no reservations, so that was really exciting—we were stranded here and fell in love with the place.” Judas agrees. “We got hooked out on the hook of Cape Cod!” he says. Eventually they made their way here and purchased the Benchmark Inn, now in its ninth season. “Dan always had a dream of running a beach bar in the Caribbean,” jokes Luethi. “Well, we’re not in the Caribbean, but at least we’re on a beach!”

There are challenges inherent in being bi-oceanic. While they handle bookings, questions, and all the tasks associated with the inn’s administration over the winter, they do have a manager onsite, standing in for them. The hardest thing about that? “Teaching him to braid the Swiss bread!” they chorus. (Zopf, or braided bread, is made with eggs, butter, flour, and yeast, and is deceptively simple—and superlatively delicious!)

Judas and Luethi generally arrive back in Provincetown in mid-April to be ready when the season hits, and from then on there isn’t much free time. What there is they spend outdoors: cycling to Herring Cove Beach on a Wednesday or Sunday night to catch the music at Farland-on-the-Beach, and going on at least one whale watch; “the best in the world,” says Judas. “It’s different every time you go out.”

Once a year they hit the Wellfleet drive-in, usually with their staff. “We eat unhealthy burgers and fries, watch a couple of movies together, have a good time,” says Luethi.

That’s the other factor about Swiss hospitality: you get the impression they’re really enjoying what they’re doing, and that extends to creating a whole atmosphere of enjoyment at the inn, one that’s unique to the Benchmark, clearly experienced by guests, and a quintessential mixture of Switzerland and America that takes the best from both worlds.

And something the rest of the world could learn from!