Come to This Cabaret! 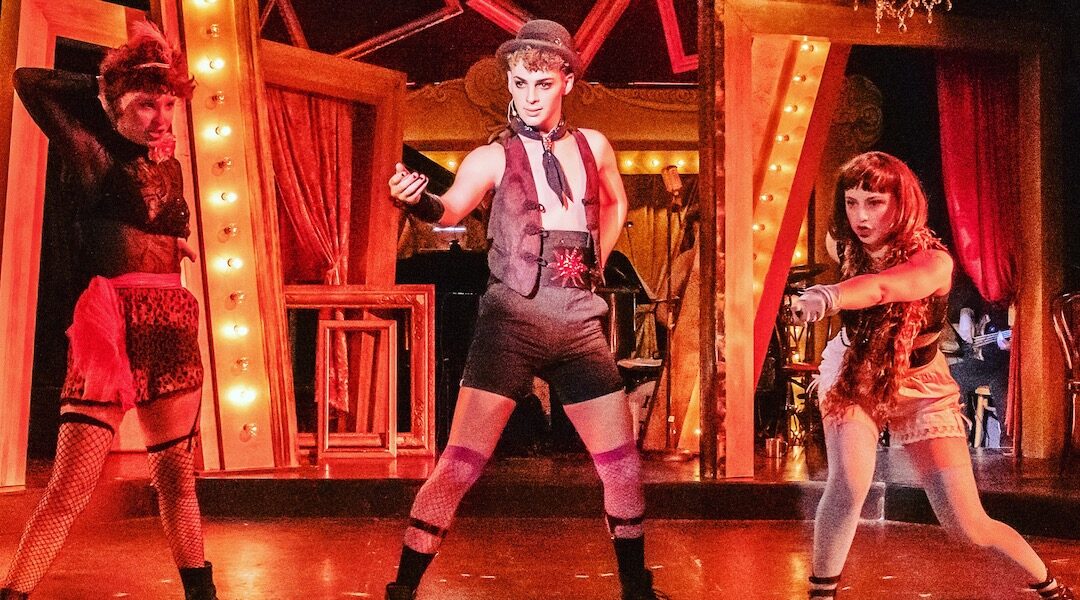 Okay. Let’s get this out of the way immediately: there are simply not enough superlatives in the English language to describe the Peregrine Theatre Ensemble’s production of Cabaret. Anything written here is a poor reflection of this brilliant theatrical performance… and experience.

And yet I’ll try.

The time is the 1930s. The place is Berlin. The decadence and excesses associated with Weimar Germany are at their last flowering when an aspiring American novelist, Clifford Bradshaw (Owen O’Leary), arrives with little more than a typewriter and a somewhat naïve expectation of being inspired by the city. He is befriended by Ernst Ludwig (Eli Neslund) who takes him to the Kit Kat Club, a cabaret notorious for its debauchery, fluid sexuality, and wild, carefree attitudes.

“In here… life is beautiful!” declares the Kit Kat Club’s Emcee (the exceptionally beautiful and talented Ryan McNevin), who’s also the show’s narrator. “Leave your troubles outside!” But one feels it might be already too late for that to be possible.

Cliff has stumbled into precisely the sort of place he wants to write about; he is a wide-eyed, naïve voyeur. That isn’t lost on Sally Bowles (Sarah Thorn), who’s happy to take Cliff for all he has—including moving herself in with him when she’s fired from the club. It’s in their relationship that we see one of director Kyle Pleasant’s brilliantly unexpected twists, distinguishing this production from other interpretations: O’Leary and Thorn’s couple have fallen together by circumstance, and there’s nothing in their understated interactions that screams romance. She’s a third-rate singer, he’s a novelist without a plot, and each sees in the other a path forward in their respective career. Sally and Cliff are reserved, almost rote with each other, except in the moments when one (mostly Sally) wants something from the other.

This stands in sharp contrast to the real romance of the show, that of landlady Fraulein Schneider (Halcyone Joseph Cabral) and fruit merchant Herr Schultz (Ian Leahy). Their sweet romance is in contrast to the lewd overt sexuality of the Kit Kat Club and another of Schneider’s renters, Fräulein “Fritzie” Kost (Caitlin Rose), who uses her room for professional encounters with sailors.

Cliff is finding it difficult to write, what with all the partying going on, and Ernst steps in to offer him employment: traveling to Paris and returning with unspecified contraband. Neslund’s Ernst is chilling, not because he’s creepy, but precisely because he is not. In an echo perhaps of Hannah Arendt’s “banality of evil,” Ernst is a sincere and trustworthy good friend to Cliff. Even once he’s revealed to be wearing a swastika and starts doing Nazi-like things, he still exudes a certain gentleness that makes one wish one could go on liking him. 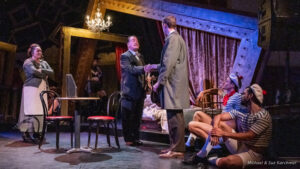 Meanwhile, Fraulein Schneider and Herr Schultz’s courtship has continued, and they invite everyone to their engagement party, where things go very wrong indeed. Anxious to get back at the landlady for curtailing her visitors, Fritzie denounces Herr Schultz as Jewish, and Fraulein Schneider reluctantly breaks off her liaison with him, citing a need for survival in the coming dark days.

Shocked by the revelation that Ernst is a Nazi and Sally is pregnant, Cliff decides to make a run for it. He offers Sally a life with him back in America, but Sally’s not on the same page and chooses an abortion and a return to the Kit Cat Club. “The party’s over,” Cliff observes, reality finally knocking on his door. While Sally goes onstage and sings, almost through clenched teeth, Cliff sits down and writes, finally, what he came there for: “…and it was the end of the world and I was dancing with Sally Bowles. And we were both asleep.”

The Emcee, meanwhile, who has been slowly falling apart throughout the second act as the show accelerates toward a now-inevitable ending, comes out for one last time and repeats his opening lines, almost on a sob: “We have no troubles here. Here, life is beautiful.” And the sound of the train becomes louder and longer and more and more unbearabl

It’s important to stress that while some roles are more prominent than others, what Peregrine Theatre Ensemble has done here is truly an ensemble piece. The cast was in rehearsal for over a month before opening, and that time and dedication shows.

Peregrine has a tradition of bringing very young, very talented actors/singers/dancers to Provincetown, and this cast is no exception (the Emcee is one year out of high school). It would seem a challenge for an older couple to hold its own against the sheer energy of youth and talent, yet curiously enough that isn’t even necessary: they’re all working together, making each other shine. It’s breathtaking.

The escapism and hedonism of German youth is superbly depicted by the Kit Kat boys and girls, who love their drugs, sex, and booze. One can’t say enough about the Kit Kat Club performers: Malley Puc as Rosie, Katie Elman as Lulu, Emily Stockwell as Frenchie, Grace Smyth as Texas, Bella Rusli as Helga, Troy Lingelbach as Bobby, Lipe Lucarelli as Victor, Nick Godfrey as Herman/Max, and Luke Ryan as Hans. Puc’s gorilla en pointe in Act Two is chilling. There is no misplaced note, no misstep, no moment through the whole production when they are not simply dazzling.

And it’s not just the cast. I’ve mentioned Kyle Pleasant’s direction in passing, but it really deserves a review on its own; it’s nothing short of brilliant. He seduces the audience into believing they’re seeing a big, beautiful show with bright lights and big, beautiful numbers, and then turns it into something else seamlessly, gradually, and skillfully, in a grim parallel to the way fascism did—and does—arrive. The first few scenes are imbued with the Weimar sex club atmosphere: naughty, sometimes beautiful, often a little perverted, but without a tremendous subtext. Then, slowly, the subtext begins to creep in, and the energy in the theater changes, the audience shifting into gradual discomfort. It’s remarkable to feel. He knows just how to play with the signature Kander and Ebb practice of attaching the most heinous words or emotional positions to a beautiful melody, and the resulting cognitive dissonance echoes in the audience’s minds long after the show ends.

Scenic designer Ellen Rousseau has outdone herself; her staging doesn’t just allow the story to be told, but enables and enhances it. Most Cabaret designers choose to make the club a tawdry, soiled environment; Rousseau’s set feels as if the club, like its denizens, might have been aiming for class, might have hoped for a better future. It also enables cast members to lurk and observe whatever’s onstage, offering an extra heightened feeling of foreboding danger.

Associate director/choreographer Drew Minard assisted Pleasant with the choreography, which could not have been more spot-on. While the audience loved the Kick Line (despite its own creepy message of conformity), I thought the most powerful piece in many ways—but especially in its choreography—was Money; it even ends with something not unlike a dismissive rap gesture that subtly but frighteningly connects Weimar in the 20th century to America in the 21st. Pleasant harnesses and directs the talent and energy of this cast so that it absolutely explodes on stage. It’s breathtaking. 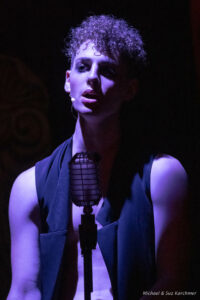 Key in the subtle shift of energy is the lighting. Gifford Williams is an artist who paints with light, building tension and then shattering it. Seth Bodie’s costumes are lush and sexy and alluring—until they’re not; the Emcee’s splendid outfits degrade during the course of the show, while the garters-and-lace outfits reek of sex and desperation. Chris Mateer’s sound lulls and then awakens. Chad Hayduk’s makeup falls just short of caricature and portrays personalities as much as does the acting. The band (including a pitch-perfect accordion) sets the scene and drives the plot. Like I said, this is a true ensemble effort.

Oddly enough, this production was selected several years ago; executive producing director Adam Berry and artistic director Ben Berry had no idea, then, how chillingly apt these performances would be in 2019. It’s a story about the folly of ignoring what is happening, of deciding that survival trumps morality, of hoping (with Herr Schultz) that “it will pass, I promise.” It’s a story that could, in its own way, be ripped from today’s headlines.

Peregrine just gets everything right, down to the smallest details. The punch served at the bar is a pineapple concoction, echoing the onstage gift from the fruit merchant to his landlady. The cast photos in the program aren’t standard acting headshots, but gorgeous portraits in character. The cast visited the Auschwitz Museum in NY together to contextualize their performances. There is nothing Peregrine can do wrong. Every year I think the productions can’t possibly improve, and every year they do. Peregrine’s Cabaret is a spellbinding invitation to party on with them into the apocalypse.

Peregrine Theatre Ensemble’s production of Cabaret is at Fisherman Hall from July 10th to August 31, Wednesday through Saturday, 7:30 pm. Photos by Michael and Sue Karchmer. Pre-show prix-fixe dinner is at The Pointe restaurant, right across the street.