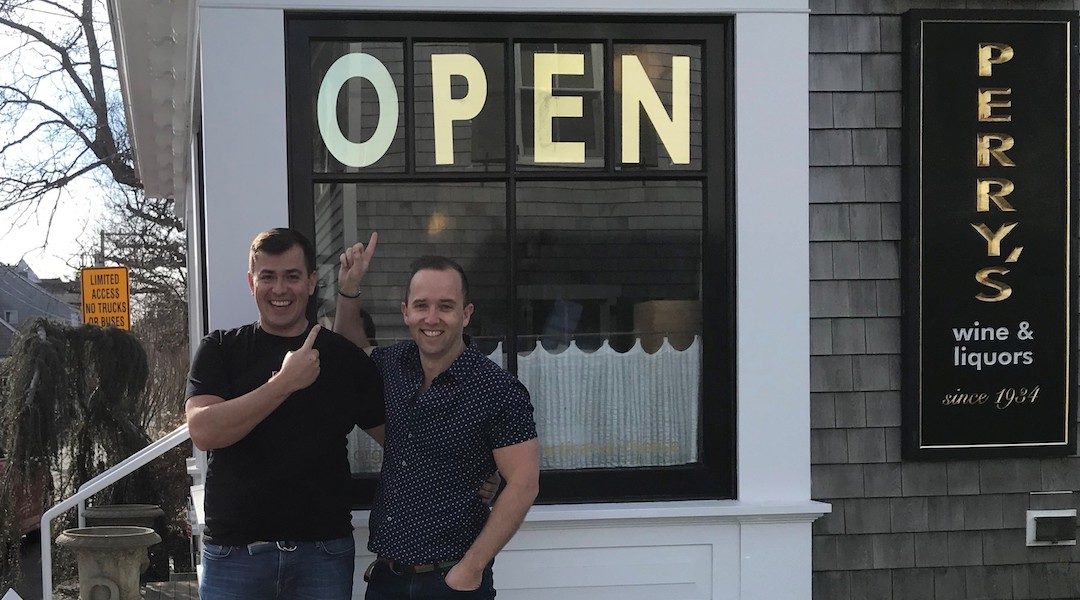 Charlie Greener and Billy Marshall met rather dramatically—on an around-the-world yacht race in 2004! The race made a stop in Boston coming up from Cape Town, and during this stopover someone recommended that the couple visit Provincetown, “and we never stopped coming here!” says Greener. “During our visits we became customers of Perry’s and friends with Tom and Scott. The rest is history.”

They’re now the new owners of the iconic Perry’s Wine & Liquors, rated on Cape Cod’s A-List and a Provincetown institution since 1934, located on the corner of Commercial and Tremont Streets in the West End (just look for the famous “open” sign!).

The new owners both come from an international background. Marshall is half-American, half-Mexican, though he holds a UK passport after 17 years living in Europe. His prior management consultancy in London focused on finance and retail efficiency. Greener is English, studied French and Spanish, and worked in marketing for 15 years across Europe and Latin America, first at L’Oreal, then Diageo in London, and then more recently as VP of marketing for Diageo in Mexico.

They left Mexico City in December, and Marshall is now based permanently in Provincetown while Greener will be going back and forth between Ptown and London for the time being.

“We’re really excited to take on such an iconic and loved Provincetown brand and business and really build on the amazing work that Tom and Scott have invested in the place over the years,” says Greener. “We’ve inherited a very healthy baby, so honestly won’t be looking to change much, but obviously bringing in some products that have our own personal stories…. Beyond developing the business, we’re looking forward to being a true part of the Provincetown community which we felt so welcomed by, and have fallen in love with, over the years.

So come by Perry’s and say hello. “Billy is the tall one, Charlie the short English one,” says Greener with a smile. They’re sure to soon become familiar figures to everyone in town and will need no introductions!