The Guilty Pleasures of Sweeney Todd 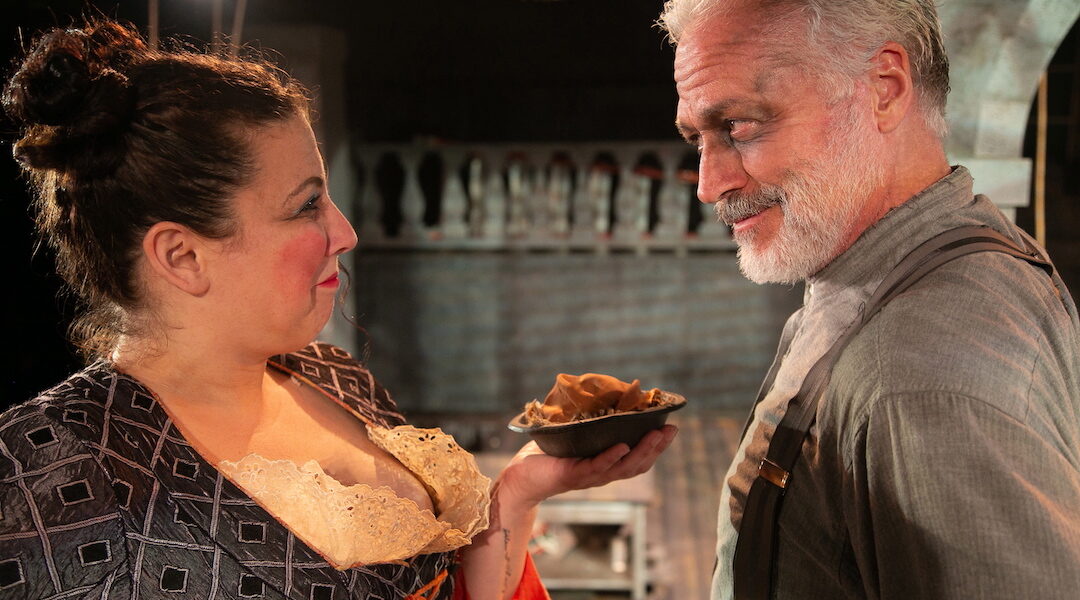 Sometimes the best stories are the tried-and-true ones. In London of the 1840s, “penny dreadfuls” offered Victorian readers a cheap escape into a world of ghoulish murder and gruesome violence, twisted guilty pleasures. One such story was that of a barber who murdered his clients, sliding their corpses into a meat grinder to be baked into the most delicious pies by his landlady.

Not exactly a plot for a musical, one would think, but the guilty pleasure somehow endured. It became a play, in which a backstory was created to somehow justify the barber’s bloodthirsty pursuits (the Victorians had no need of any nonsense like moral justification), and then a Broadway musical by Stephen Sondheim—the present form of Sweeney Todd, The Demon Barber of Fleet Street, directed by David Drake and playing at the Provincetown Theater through August 29.

Sweeney Todd (played wonderfully malevolently by the extraordinary Tom Hewitt) has just returned to London from a penal colony. He rents space from Mrs. Lovett (the versatile and always-awesome Trish LaRose), and tells her his story: wrongly accused by Judge Turpin (Eric McNaughton) who takes the barber’s daughter Johanna (Madison Mayer) as his ward—and, he creepily plans, his future wife. Meantime he has apparently raped Johanna’s mother Lucy and, Sweeney believes, possibly killed her. He wants revenge on the judge, sure; but why not throw in the whole human race? 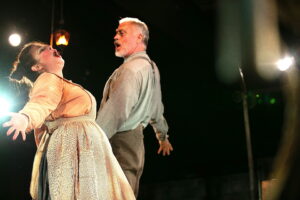 Mrs. Lovett is unsurprised at this turn of circumstances; she’s developed a small crush on Sweeney, but is mostly interested in keeping her establishment afloat, with maybe a little of that guilty pleasure thrown in. She enters wholeheartedly into his new venture and finds it revitalizes her meat-pie side business—who knew people would take so enthusiastically to eating other people? (Of course, they don’t know they are, which makes one wonder how much of a cautionary tale the original penny dreadful might have been.) Eventually, the judge is cooked, Johanna is freed to be with her sailor boyfriend, Anthony Hope (Sean Potter), and Sweeney discovers the most terrible secret of all.

Let’s just say, know who you have in your chair before you slit their throat with the straight razor.

Hewitt and LaRose are perfectly matched and both turn in absolutely brilliant performances. A revelation was Mayer’s voice—sweet and substantial; I wished she had more solos to perform. Hewitt’s Sweeney is dark and dangerous: he somehow conveys the violent thoughts lurking inside his head even when he’s not speaking, singing, or moving, a real tour de force. When he says, “There’s a hole in the world like a big black pit,” and then looks around, no matter where you’re sitting, you feel he’s looking directly at you. LaRose takes on the role of Mrs. Lovett with obvious glee: this isn’t your ordinary widow just looking to get by, no matter how many times she says she is—LaRose makes you feel this particular widow might easily eat men alive, barber or no barber.

The direction and staging work together to create an atmosphere of foreboding and mystery. The beginning of the play is creepily reminiscent of the Salem Witch trials, due in no small part to Ellen Rousseau’s stage set, bleak and bare, raised above the audience and accessible through so many places you feel anyone can pop up at any time. And they pretty much do.

The supporting cast—Christopher Sidoli as Pirelli, John Strumwasser as Beadle Bamford, Thomas Cover as Tobias Ragg, Megan Amorese as the beggar woman, and Tatiana Chavez in the ensemble—is amazing. Donning masks to become a sort of Greek chorus, they move in and out of the center stage’s action silently and seamlessly and more than a little creepily. And John Thomas and the band are impeccable.

This is one guilty pleasure you don’t want to miss!

Sweeney Todd: The Demon Barber of Fleet Street is at the Provincetown Theater Mondays through Thursdays at 7pm until August 29.