Why Will You Die Laughing at Murder For Two? 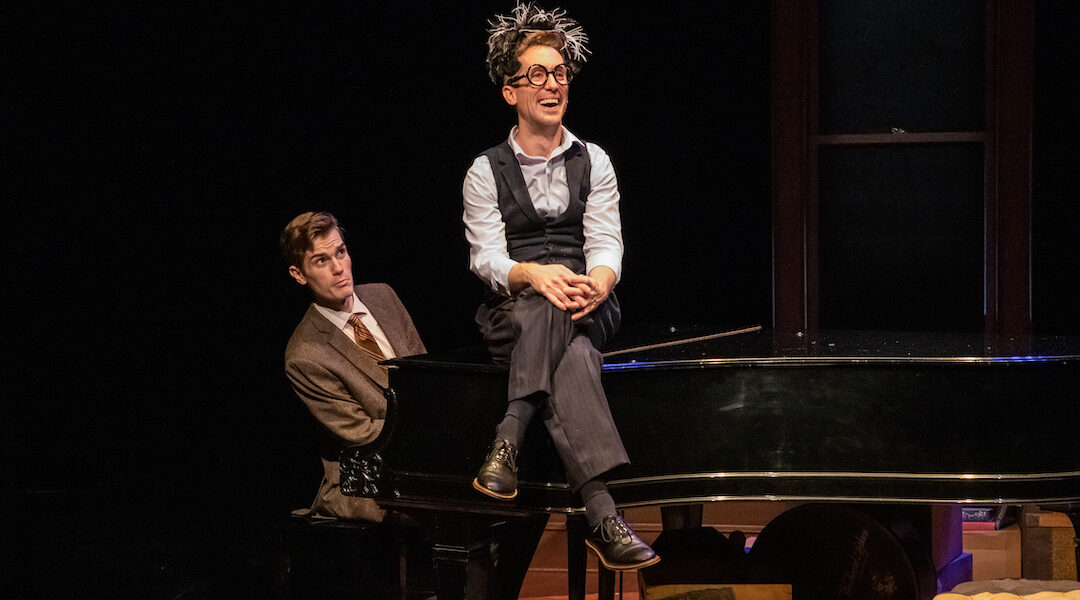 It’s a comedy. It’s a musical. It’s a vaudeville production. It’s a mystery. It’s Murder for Two, playing at the Wellfleet Harbor Actors Theater through July 27, and it’s a wacky, playful, wondrous romp through the staid drawing-room murder genre by two piano-playing actors whose on-stage chemistry is perfect and whose talents appear boundless.

Novelist Arthur Whitney has been murdered at his own surprise birthday party (in a lovely bit of whimsy, scenic designer Richard Chambers has outlined the body with Whitney’s books rather than chalk). Officer Marcus Moscowicz (Sam Krivda) and his “off-screen” partner Lou are the first on the scene, and it soon becomes apparent that all the guests had a decent reason to do the deed.

The other thing is, all the guests are played by the same person: Matthew McGloin, in a delightfully funny tour de force of caricatured characterizations.

There’s Dahlia, Whitney’s widow, a resentful Southern belle; Dr. Griff, everyone’s not-so-favorite psychiatrist; Barrette Lewis, a French ballerina having an affair with Whitney; and Steph, Whitney’s niece and a graduate student who wants to help Marcus solve the case (her thesis title is  “How to Assist in the Solving of a Small-Town Murder”). Neighbors Murray and Bev and “little tough guys” from a 12-member boy’s choir (don’t worry about their innocence: they’ve “seen woise”) round out the suspect pool. And yes, McGloin plays the roles of both neighbors as they argue together. (“Stop accusing me!” Murray says; “Stop murdering people!” she responds.) An audience member gets to guest-star as an additional victim. 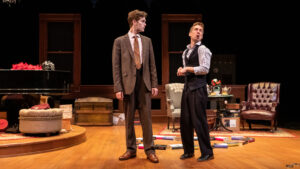 Both actors are masterful, though McGloin obviously receives the most applause as he seamlessly whizzes from one character to the next, giving each persona immediately identifiable traits using nothing but his body, voice, and one or two props. Krivda, as the “straight man” in the piece, doesn’t have the same built-in comedic opportunities but holds his own—no small feat—opposite the wacky shapeshifting McGloin.

There’s a lot of music with fast, snappy songs—a deliberately derivative parody of musical theatre, the actors taking turns at the keyboard or even playing in tandem. They regularly break the fourth wall, whether it’s Marcus talking to his invisible partner (“I’m glad you’re here, Lou, if it weren’t for you I’d just be thinking all these things”) or McGloin accusing the audience of not silencing cellphones whenever Marcus’ phone rings onstage.

The energy level is definitely for the adrenaline-addicted. Director Sam Scalamoni keeps the pace—and more importantly for comedy, the timing—pitch-perfect, an Agatha Christie drawing-room mystery on speed.

WHAT hits an absolute home run with this murder musical that earned its two opening-night standing ovations. Theatre on the Outer Cape is getting better and better every season and WHAT is leading the way with sparkling performances like this one. Leave the problems of the world behind and enjoy an evening of hilariously funny homicide.

Murder for Two: An original musical with book and music by Joe Kinosian and book and lyrics by Kellen Blair is at Wellfleet Harbor Actors Theater through July 27. Photos Michael and Sue Karchmer.