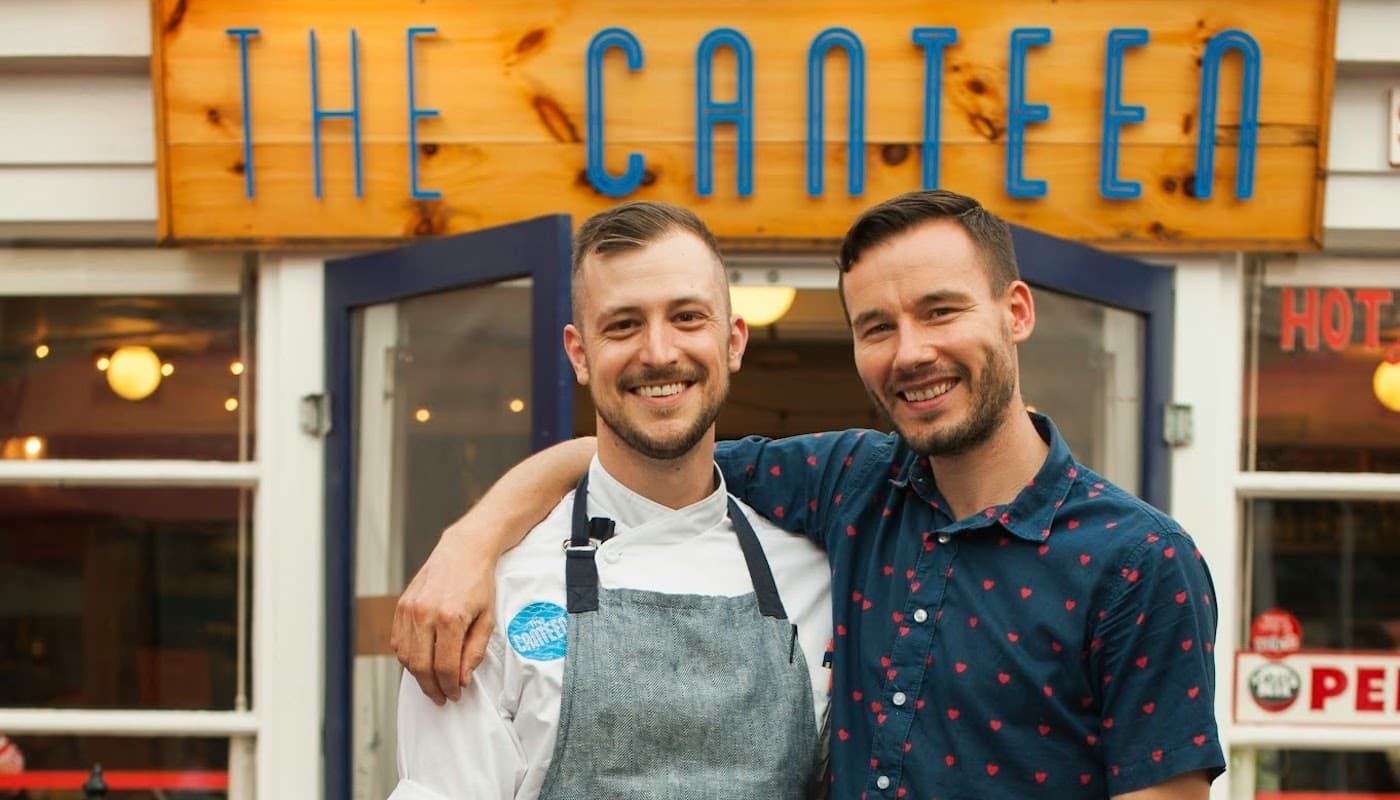 “What makes this place so special?” asks Rob Anderson, chef and co-owner of The Canteen restaurant, repeating the question aloud, thinking about it. “We’re seven years into this business, and we still have locals coming in for the first time and saying, This place reminds me of what town used to be like. That’s the compliment we’re proudest to receive, that someone sees we’ve captured some of that, of old Provincetown.”

The Canteen does that—and more. The restaurant is creating a uniquely Provincetown environment, with a space that the new mission statement calls “unpolished, shabby, and inspired by the natural and built environment around us, especially the ocean, beach, and dunes.” Despite finishing that mission statement, Anderson is still asking questions. “We’re honored to have become an institution in town, and we’re trying to grow into that class of Provincetown businesses. How do we do that? What does it mean?”

It’s a healthy way to approach a business.

The Canteen came about through the energy and vision of Anderson and his partner Loïc Rossignon. A former journalist, Anderson moved to Boston in 2010 and promised himself weekend getaways around New England. His first trip brought him to Provincetown where he met Rossignon, who, at that time, had been a year-round resident for almost a decade. Somehow Anderson never got around to all that traveling after all. “I never really fit in with the journalism/political crowd anyway,” he confesses. When a physical space opened up in Provincetown a year later, Anderson and Rossignon decided to go for it. Anderson left his job at the Boston Globe to go to culinary school in New York, while Rossignon set aside his jobs working as a server at the Mews Restaurant and building elaborate floats for Provincetown’s annual carnival parade to start the Canteen’s own build-out, which he completed by himself. The restaurant opened in May 2013. 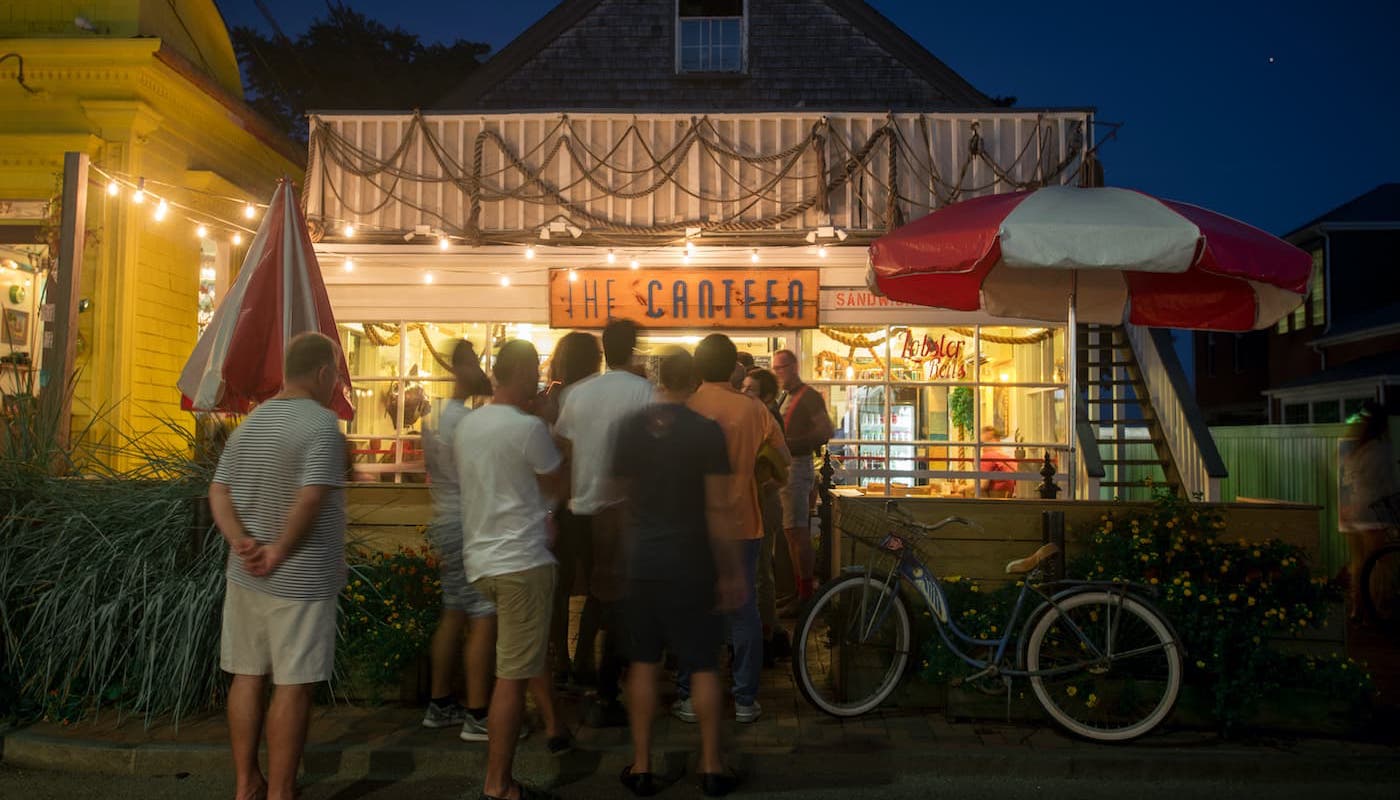 “It’s Old Provincetown in its idealized form,” Anderson says. “We think of ourselves as what a true Cape Cod restaurant is: food based in New England traditions, fast-casual… but we’re not bound by restrictions, and we celebrate diversity in our menu. Our region can sometimes be parochial. We respect that, but push against those boundaries.”

Those boundaries include the challenges inherent in a seasonal economy. “From the start, it was about creating a workplace that cares for the folks who work here,” says Anderson. “That includes housing, healthcare—we’re worried about the important issues.” The Canteen transcends boundaries. “We think of the business as a tool we can use to do better—for the world, for our community, for our staff, for ourselves. We’re the stewards of this thing that allows us to create better lives for everyone involved.”

Naming the restaurant came easily to Anderson and Rossignon. “First of all, the space is centrally located,” says Anderson. “And we liked the theme of a summer camp experience. At camp, the canteen is centrally located, it’s where everyone comes together. Where people start their days and end their days.” The centrality isn’t just physical. “It represented this idea of being a central meeting-point, something central to people’s lives.”

The menu grew out of that concept: they wanted choices that would have something for everyone. “We wanted food that makes people happy,” says Anderson. “We do New England classics—but the best version of every dish. Our lobster rolls use brioche, and ten months out of the year it’s fresh local lobster that we steam and shuck ourselves. That’s actually not done widely, even around here.”

There’s usually a Canteen twist on even the most familiar dishes. “People told me you couldn’t put unusual items on your menu in Provincetown,” recalls Anderson. But the Canteen was first with a number of dishes other restaurants later adopted, such as Brussel sprouts. “Bahn-mis weren’t exactly the norm when we opened,” Anderson says, “but our cod bahn-mi became one of our number-one sellers.” Can’t put unusual items on the menu? “I’m thrilled our guests are proving the lie.”

This past off-season was the third year the Canteen offered international food nights. “We looked around and other businesses were already was doing fish frys and comfort food, so that was already taken,” says Anderson. He asked people what was missing, and came up with the concept of bringing other countries’ foods to Provincetown with special tasting menus. “It’s so people don’t have to drive somewhere else to get big bold flavors. In the middle of the winter doldrums, a bright, flavorful meal can really make your week. It resonated with folks, and answered one of the problems of winters in Provincetown.” 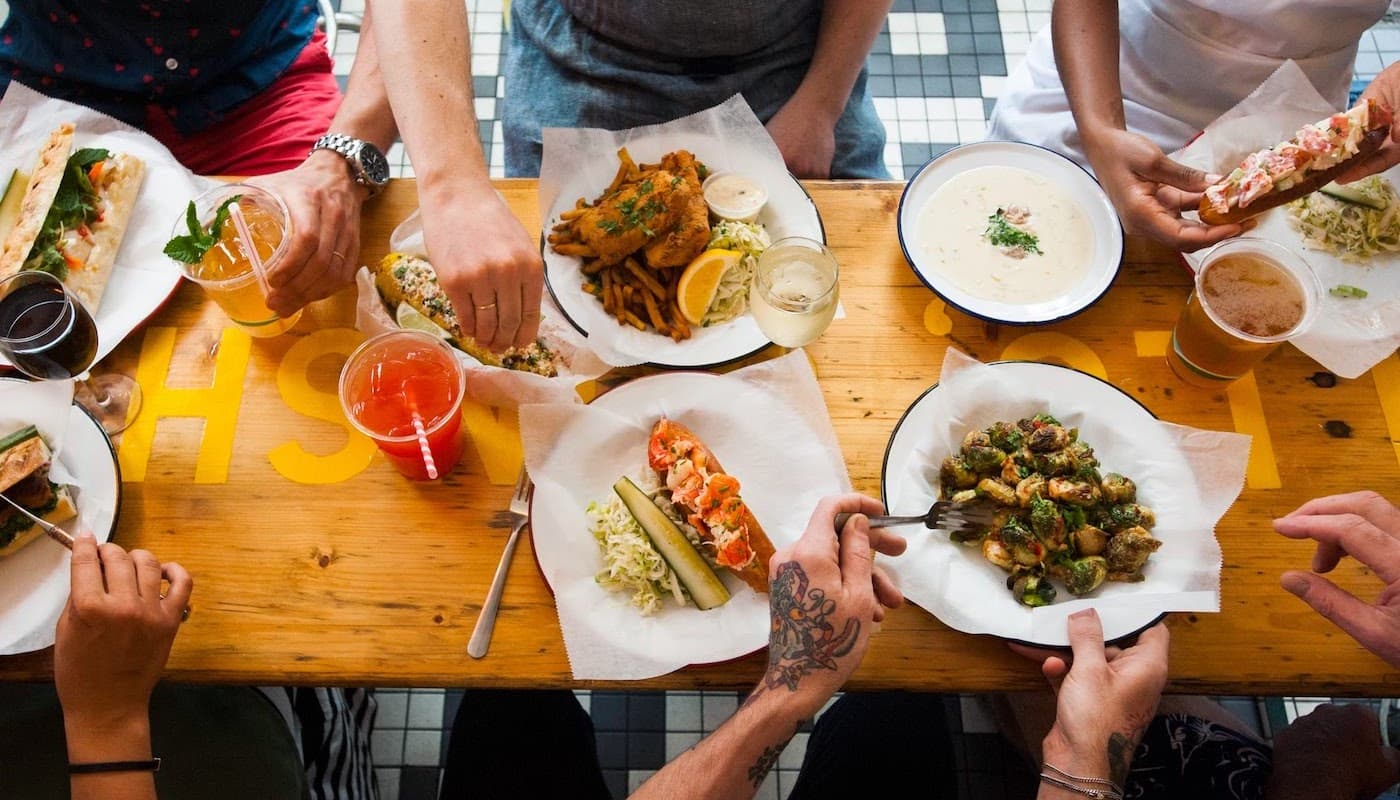 “Listen, the conventional wisdom is that winters are easier and slower than summers. In the summer there’s this organic pressure to keep going; it’s hard to keep that energy going when it’s slower and colder and darker. So if we’re not getting that energy from folks, we have to summon all that energy from within ourselves, we have to give the energy back to the community.”

There’s more to the Canteen—literally—than meets the eye. “There’s actually a complex web of things going on here,” says Anderson. “I’m half chef/owner, and half community organizer!” The old Connie’s Bakery site across Route 6 serves as the Canteen’s commissary kitchen, with production feeding into the restaurant two or three times a day in the summer. With two kitchens, a delivery route, a bunkhouse with 30 beds arranged dorm-style, and a rent-to-own housing program, there’s a lot going on!

But there’s even more on the horizon. “We want to keep growing into our full selves.,” says Anderson. “We’re still refining what we do and how we do it. There are two goals for us: defining what the Canteen experience is and executing it for both guests and staff, and develop more efficient systems for our food and hospitality.” Rossignon is starting a farm garden in Truro so the Canteen can grow its own herbs, make jams and sauces, and compost refuse from the restaurant. Freshness counts for a great deal here… but it’s combined with the human side of things, too.

That hospitality was brought to a new level with the advent of the coronavirus pandemic. The Canteen was one of the first restaurants in town to open a pickup and delivery option and was transparent with the community about how food was sourced and prepared. Responding to further community needs, Anderson and Rossignon began a grocery-to-go service, offering fresh fruits and vegetables, bread, dairy, dry goods, beverages, paper products and cleaning supplies. The service became wildly popular and was also offered free of charge for those who couldn’t afford groceries. It even lifted spirits with the popular order-in-advance-so-they-don’t-run-out cinnamon rolls—a treat to look forward to when life seemed bleakest! At every stage of the pandemic, The Canteen has been present, in dialogue with the community and serving it as a good neighbor.

And that’s what makes the Canteen so special.

There’s more where that came from! Ptownie has more to share about our special town at land’s end. Learn how to do a Cape Cod Clambake!

How to do a Cape Cod Clambake