A Stampede for Our Times: Rhinoceros at the Wellfleet Harbor Actors Theater 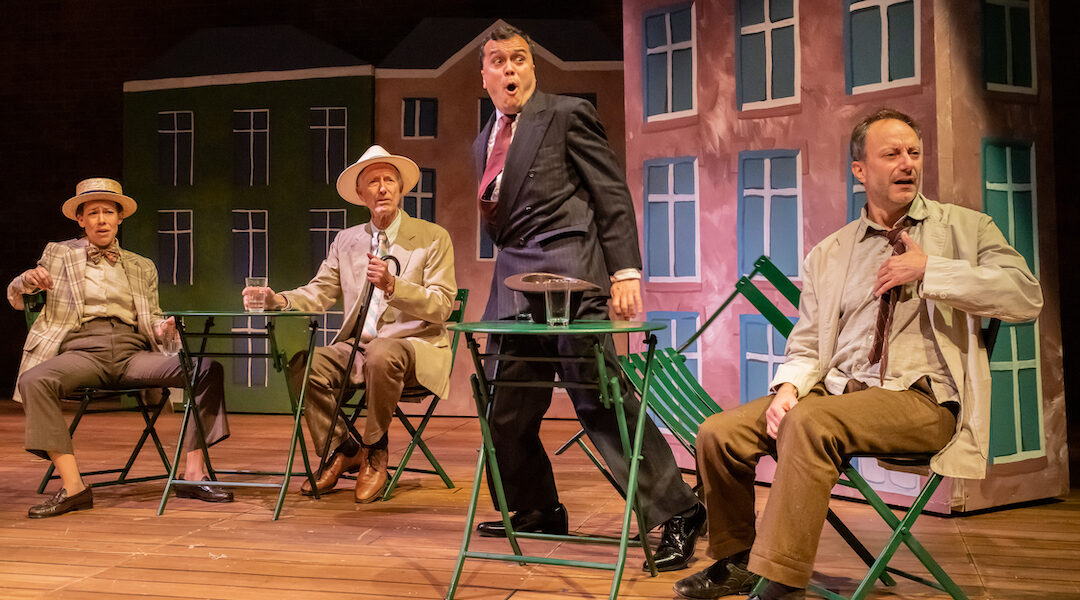 One could argue that 1959, when Eugène Ionesco wrote Rhinoceros, was a time far removed from our own. World War Two was little more than a decade over. The Cold War was vigorous. Yet sixty years on, the play is chilling in its indictment of the problems of 2019, and WHAT’s brilliant staging of the piece is enough to, frankly, frighten any audience out of its wits. Which doesn’t mean it doesn’t have its charming moments—just hold on to your hats.

The production is a celebration of sorts—WHAT’s 35th anniversary, with the luminous presence of Daisy Walker directing the same play her father directed during WHAT’s first year—but it also rings in a dire warning in the age of Trump. Ionesco might have been issuing an alarmed reaction to the mid-20th century proliferation of totalitarianism (fascism, communism, nationalism), calling out a comforting adherence to what everybody else is doing; but that same herd mentality is threatening our own times and the warning feels fresh and prescient today.

The play opens on a sleepy French square where Jean (Justin Bennett) sits at a café castigating Bérenger (David Fraioli) for his bad habits, particularly around his alcohol consumption and sartorial imperfections. Also along to get us in the mood for absurdity is a logician (Kelsey Torstveit), tirelessly pursuing the importance of defining the world: “Another syllogism. All cats die. Socrates is dead. Therefore Socrates is a cat.” 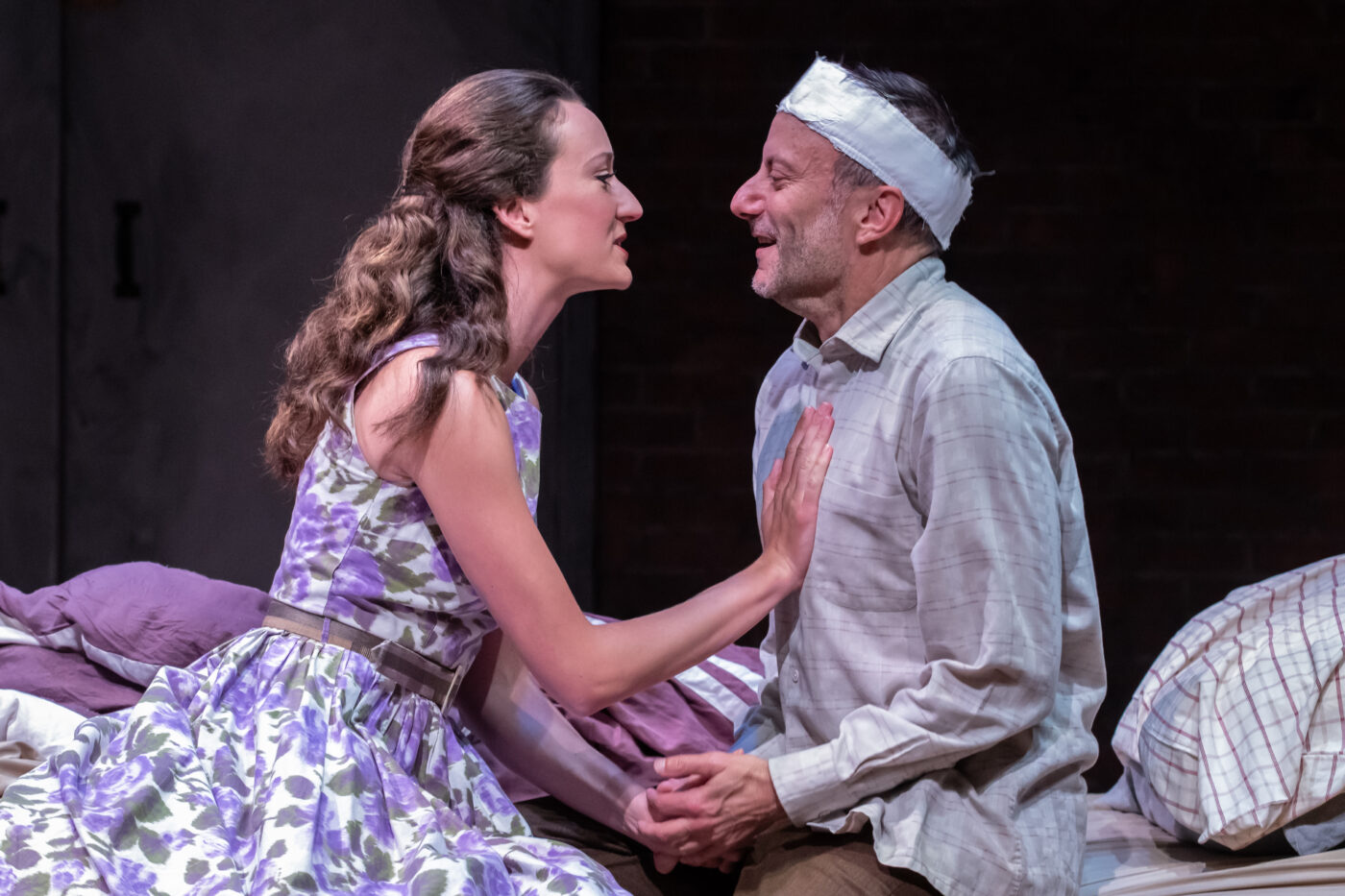 They are among the first to see the initial rhinoceros on its solitary stampede through the village and exclaim in astonishment, joined by other townsfolk in the square who also witnessed the frightening apparition. Only they don’t seem particularly frightened. “Well, of all things!” everyone exclaims in a particularly French point-and-counterpoint chorus, while the café proprietor (Christopher “Chiz” Chisholm) protests that “it’s no reason to break the glasses.” Rather than make practical plans for dealing with the situation (or even questioning their own perceptions), everyone then launches into a lengthy discussion of what sort of rhinoceros it was, Asian or African.

The absurdity of this discussion is just the beginning of Ionesco’s skillful manipulation of our perceptions. Like Alice through the looking-glass, the French villagers find not only that white is black and up is down, but that they’re able to defend most vigorously this new “interpretation” of reality. Alternative facts, anyone?

One by one, the townspeople are seduced to join the rapidly growing herd of rhinos. Even though what’s happening is ludicrous, no one points out the absurdity of it. No one looks for a solution or even suggests abandoning the town. Instead, they find reasons to acquiesce, to go along, to not be singled out—just as happened too often in Europe (including Ionesco’s native Romania) as Nazism spread, just as is happening in America as nativism and nationalism spread. Critical thinking isn’t a part of either scenario. 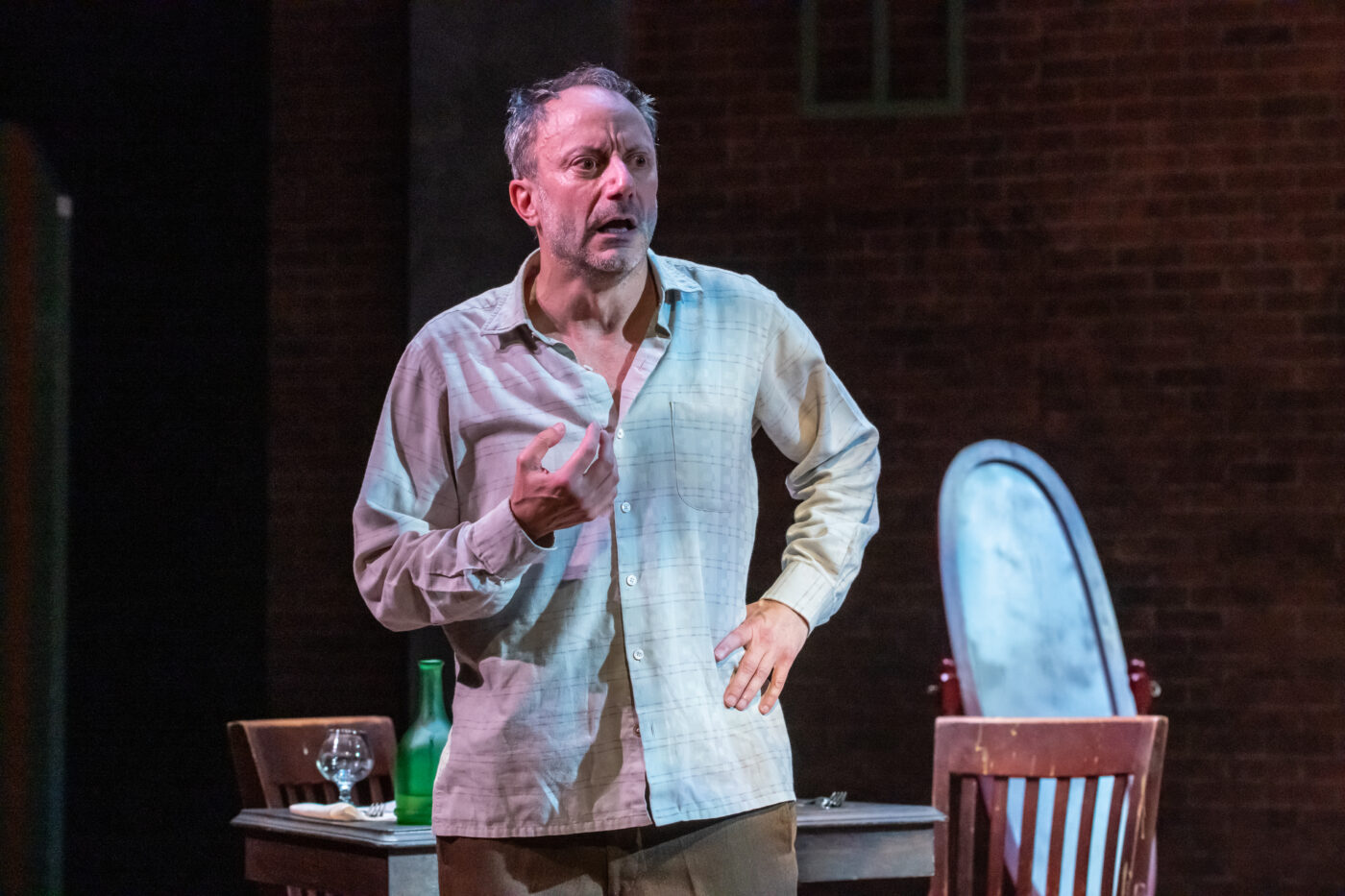 It’s interesting to see this played out in the theater. As the first act opens, the audience seems relaxed, laughing at the jokes, the wordplays, the double-entendres, but as the play progresses, the audience slowly stops laughing and starts feeling uncomfortable as question after question present themselves. Why did so many humans choose to be assimilated into the rhinoceros herd? And why are the remaining humans so unconcerned about what is happening?

That’s where the core of the absurdity of Ionesco’s play lies. More upsetting than the population’s transformation is the holdout humans’ reaction. Ionesco catalogues all possible excuses for looking the other way: fake news (the rhinos aren’t real), denial (they’ll come around), oblivion (stop worrying so much), acceptance (they seem happy enough). What ten years ago might have seemed to be comedic exaggeration rings frighteningly true today. When Daisy says, casually, “There are many sides to reality—choose the one that’s best for you,” the laughter has all but disappeared from the theater.

It would be tempting to go overboard on physical hijinks, but director Daisy Walker’s touch is light and surprisingly subtle. She elicits outstanding performances from the ensemble cast, and especially from Farioli and Gigi Watson, who plays Daisy, Bérenger’s possible love interest. In some ways, Walker just steps back and allows Ionesco to set the pace—a feat far more difficult than it appears, given the gulf of differences between French and American expression and culture.

WHAT’s Rhinoceros is a triumph. Not only because of its timeliness, but also because of the exquisite quality of this production. It’s achingly good, and will leave audiences thinking… and, perhaps, might even stir us to action before it’s too late.