Humanity at its most raw: “The Humans” wows Provincetown 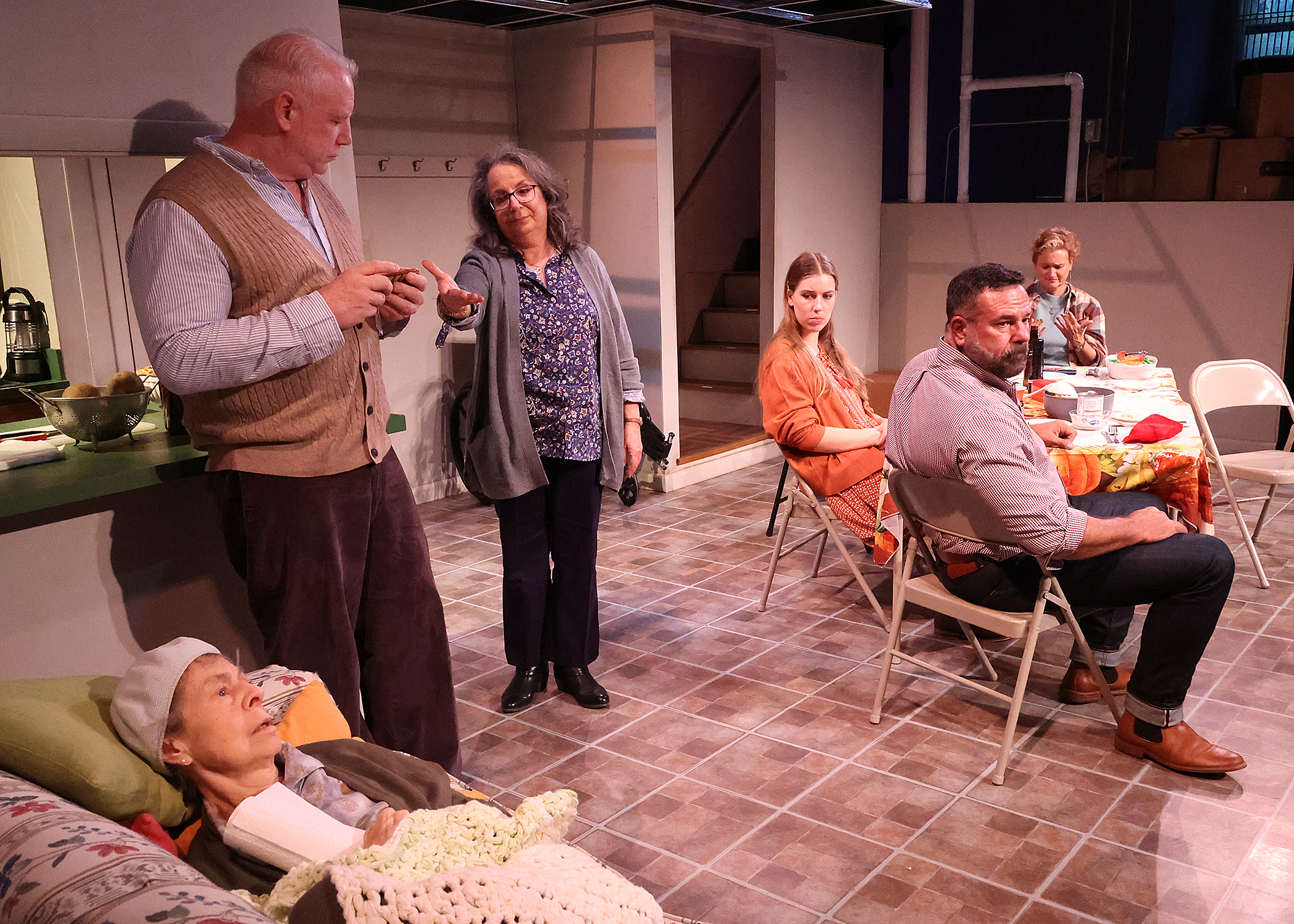 Make sure you see The Humans at the Provincetown Theater before joining your family for the holidays; it will reassure you that your people’s insanity is way down on the crazy scale.

Dysfunctional family gatherings are a staple of theatre and literature, and for good reason: explosive emotions, hidden secrets, enabling behavior, seething resentments, even actual violence can all happen at any moment. Playwright Stephen Karam plays all these notes and more as a blue-collar Catholic family comes to spend Thanksgiving in NYC’s Chinatown where its younger daughter has just moved in with her boyfriend. (In that sentence alone there’s enough potential for fireworks to make anyone happy!)

At the opening of the play, everything seems predictable. Family patriarch Erik (played with amazing authenticity by Ken Lockwood) fusses about issues of safety in the city. His wife Deirdre (Jadah Carroll, in a brilliant and believable tour de force) is fussing around her daughters, the apartment, and her husband. Older daughter Aimée (Laura Scribner) initially seems a take-charge sort of person; no one is surprised to learn that she’s an attorney. And Erik’s mother, referred to as “Momo” (Dian Hamilton), is both present and absent; she’s struggling with dementia and spends much of the play either asleep or wandering off—mentally and physically—and wailing, a counterpoint to the forced gaiety of the rest of the family and presaging something darker on the way. The younger couple, Brigid (Danica Jansen) and Richard (Nathan Butera) have literally just moved in and keep needing to empty boxes in order to find things. Eric, who is in the kitchen cooking the meal, is pretty much ignored by the Blake family as they loudly and repetitively transact family business: why are you here, why not in Scranton, Momo has her good days, where’s the toilet paper. 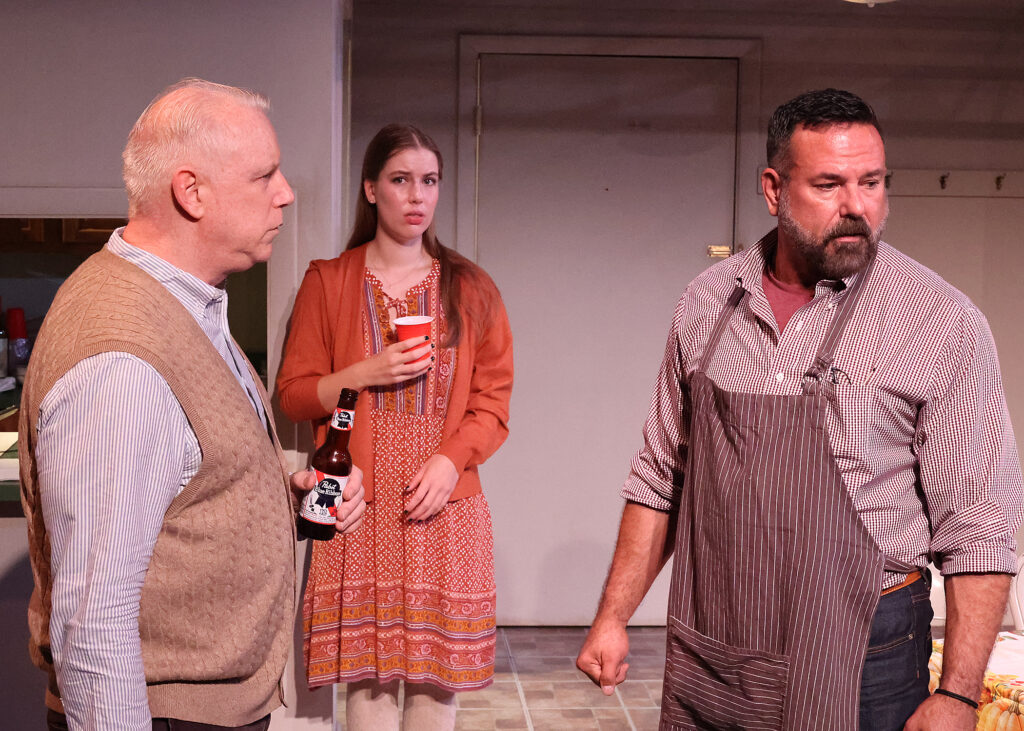 The cracks start appearing soon, and the combined brilliance of Karam’s writing and David Drake’s direction build the tension slowly at first, and then faster and faster as the evening careens wildly toward its close.

Aimée’s girlfriend has left her and she is additionally struggling with ulcerative colitis. Deirdre, still working at the same job she had 40 years ago, is sublimating her fears and pain by becoming obsessed with a refugee family. Brigid, who initially seems cheerful and together, is drowning in student debt, working several jobs under the table to get by. Erik is haunted by nightmares that began after he and Aimée had a narrow escape from disaster on 9/11, and concerned that Brigid has moved in a few blocks from where his grandmother died in the Triangle Shirtwaist Fire of 1911.

And Richard seems to crystallize for the whole family what is wrong with their lives, as Brigid reveals that while he is working on his MSW he is also due in two years to collect a trust fund, revelation that has Erik seething with envy.

The pace accelerates through the meal as favorite family customs give way to drama and revelations of secrets, fueled by alcohol and resentment. It turns out the high-flying lawyer has been fired, Erik lost his maintenance job at a private school after having an affair with one of the teachers, Brigid’s plan for a career in music has been short-circuited by a lukewarm recommendation letter, and no one really knows what to do with Momo.

Erik is increasingly annoyed with the young couple. He doesn’t understand Richard’s past bout with depression, and when Brigid reveals what has stalled her career, he bursts out with “Your grandma grew up in a two-room cesspool and your tragedy is what—having to figure out how to get a new letter of recommendation? You’re lucky to have a passion to pursue, if you don’t care about it enough to push through this setback, you should quit and do something else.”

This is third-generation Irish Catholic drama at its best, life lived fortissimo. Everyone is drinking, everyone is yelling, everyone is talking over each other, and—as is true for nearly every Irish tale—in the end, the playwright, the director, the cast and the audience all step back for Erik and his issues and his fears to take center stage, both literally and figuratively. (I’ve always found this focus of sympathy on male characters irritating, and its presence in The Humans is no exception.)

That said, everything else in this play ticks all the right boxes, especially with each individual actor bringing their A game to their roles. Carroll’s portrayal of Deirdre is magnificent and in many ways utterly steals the show; Lockwood moves Erik through a crumbling identity crisis with aplomb (even down to the old-man trousers always on the verge of falling off); Scribner’s Aimée is struggling to not be overwhelmed by her own triple tragedy (not to mention her father’s reminder of what came close to being the ultimate family tragedy). 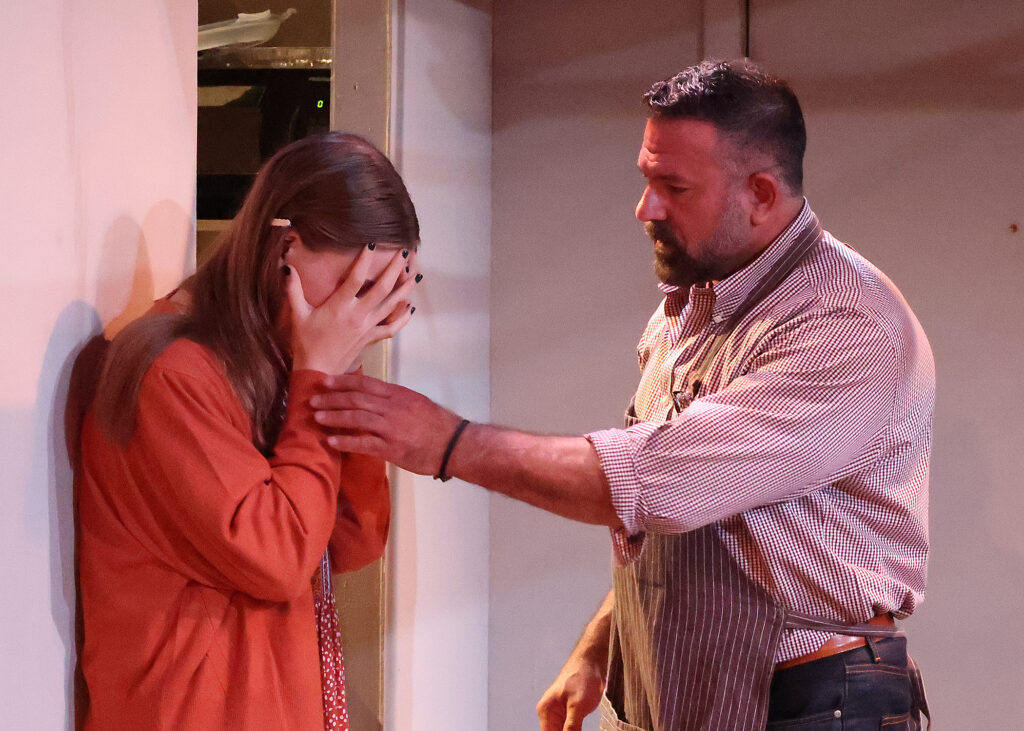 Jansen walks a fine line in her portrayal of Brigid: the smart daughter trying to define who she is in regards to her family, to her boyfriend, and to her world, and she is achingly eager to make this all work—even when unwrapping her mother’s housewarming gift, a statue of the Virgin Mary.

One has to feel for Hamilton, whose role as Momo keeps her a silent presence for ninety percent of the play; but her ability to make that presence communicate is impressive. And Butera, too, has a thankless role in many ways: Richard is an observer, trying to understand and connect with this family without wishing to get drawn into it, and Butera pulls it off with style, making Richard smart, empathetic, and—understandably—more than a little baffled.

Karam and Drake play with atmosphere successfully, through startling noises and changes in lighting, and when at the end of the play the characters nearly all leave and the set is plunged into darkness in time for the obligatory ghost to walk, the audience is left wondering if there is any of the family left at all. That ambiguous ending, implying as it does that there’s more left to say, leaves the audience free to read between the characters’ lines in retrospect to try and find some redemption—or, at least, some mental and emotional resolution.

Which may or may not be there.