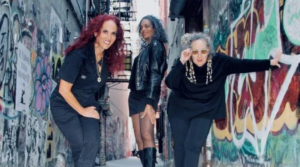 BETTY is the award-winning indie rock trio of Alyson Palmer, Amy Ziff and Elizabeth Ziff known for soaring harmonies, clever lyrics and non-stop activism. Since forming in 1986, BETTY has headlined concerts worldwide; appeared on tv (The L Word theme song & more), in films, Off-Broadway (the smash hit musical BETTY Rules, directed by Michael Greif of Dear Evan Hansen and RENT), and on dozens of guest recordings. Currently, BETTY is recording their 11th album, rocking PRIDES globally, and tours as Arts Envoys for the US State Department.