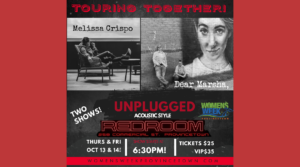 With over 1300 performances under their belt and a new full length album releasing 2022, Dear Marsha is a well-oiled rock & roll machine. While studio recordings are forever, Dear Marsha, is a magically live band. They play upbeat, energetic rock/Country tunes, and are known as “the band that has too much fun!” they play all over Colorado, and other regional states, in addition to shows in Europe and Scandinavia.

They have developed a brand and a major following and love their fans (Marshans) with as much passion as their fans love them. Getting to know this band will have you saying things like “Who’s your daddy?” … “hot, sticky, and wet!” … and “Marsha did me Dirty”

“Sort of like the Indigo girls on acid with Heart as their back up band!”

Melissa Crispo Bio: Soulful songwriting, power vocals, a mix of guitar and piano, S.S.A’s 2017 Songwriter of the year, Crispo has opened for acts such as Styx, Sophie B. Hawkins & Jefferson Starship. Her fan base grew significantly after performing on the last 3 Melissa Etheridge Cruises. From there, things began to change for the New York red neck tomboy who now resides in Colorado. With 3 albums under her belt, a full length 4th on the way, Crispo’s songwriting has a little something for everyone. Think, Stevie Nicks meets Melissa Etheridge meets Beth Hart…. Whether performing solo or with her band, Melissa’s performance is a must see!