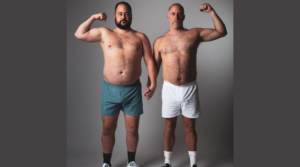 MAN ON MAN is a rock band formed by boyfriends Roddy Bottum (Faith No More, Imperial Teen, CRICKETS) and Joey Holman (HOLMAN). They began working on music at the onset of the pandemic in April of 2020, and after write-ups from outlets like Rolling Stone and NPR, the band garnered the attention of over a quarter million viewers on YouTube for their first single, Daddy.

The band describes their music as unabashedly queer, positive, and isn’t afraid to lean into tenderness while shoe-gazing till kingdom come.