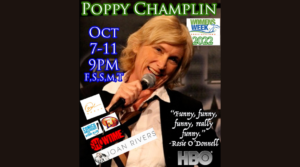 Poppy Champlin is a veteran comic who has been coming to P-Town since 2001.

Her sharp wit and intuitive jokes can penetrate anyone’s funny bone. Poppy erupts onto the stage with an energy that is fearless and contagious.  She has jokes, songs, birdcalls, parodies her repertoire is endless.  Her shows can be described as spin art, “no two alike.”