The Real Housewives of Provincetown 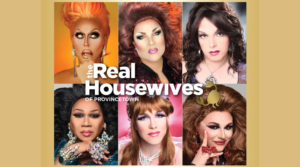 The Real Housewives of Provincetown is a hilarious unauthorized parody of the beloved reality franchise. But these aren’t your usual Housewives – these bitches are from PTOWN! Armed with high heels and low morals, join them and Dandy Cohen as he asks the most important Blue Card Questions of his career! Why did Frannie Fanizzi flip that table? Why does Countess Evelyn Shankpainter the Third love cabaret? Just who touched Melinda Macmillan’s letters? These questions and more will be revealed in the most hilarious hour that Ptown has ever seen. We made it nice!