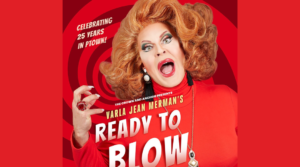 International drag chanteuse Varla Jean Merman is a woman on the verge of a nervous breakdown! After the craziest time in memory, the loosest gal in town is at loose ends.
What’s a distressed diva to do?
Tease her hair, steal someone’s Ativan, and get on with the show, of course!
Varla Jean Merman blows into Provincetown for her twenty-fifth anniversary with an all-new show filled with hilarious songs, dazzling costumes, and more thrills than a panic attack.