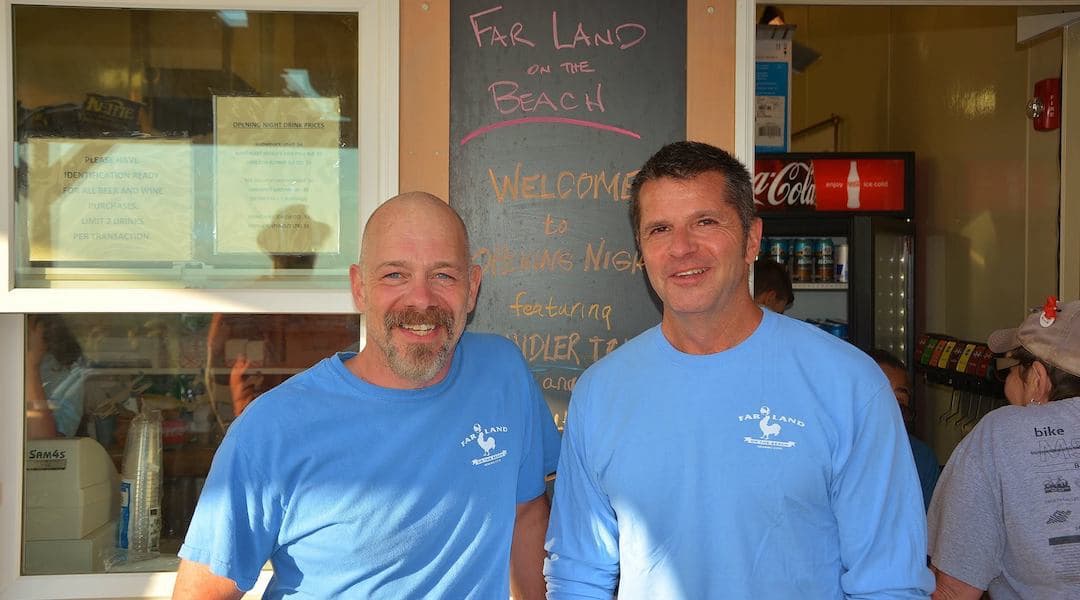 It never occurred to Tom Boland and Jim Farley to open merely a seasonal business. When we moved to Provincetown 30 years ago we were all in,” says Boland. “We wanted to be involved with the community all the time, on a daily basis.”

And that’s exactly what they created with Far Land Provisions 12 years later: more than just a food shop, it’s become a community center, a place to find balance and grounding and even inspiration, to meet friends and read the newspaper, to drink coffee and just hang out doing nothing for a while, and it’s for everyone—visitors and residents alike. Described by David Dunlap as a “beacon of life in dark winter months,” in the off-season it’s a haven for neighbors, while in the summer it’s essentially controlled chaos… in other words, Far Land is whatever its customers need it to be. And then some.

Far Land (the name comes from a merger of the owners’ two last names, not through any geographic designation) began in 2004, following a tradition of beloved local food shops in the same premises. “The place has a lot of history,” says Boland. “It’s always been a market.” The location has gone through a number of incarnations: the L&A (Leo & Arlene’s) Supermarket, Nelson’s Market, McNulty’s. As Nelson’s, the store provisioned much of the fishing fleet, delivering directly to the wharf; each past owner has bestowed a blessing on the current shop. Arlene Morris comes in every Sunday after church,” Boland says. “And the McNultys have been very supportive through the years.”

Boland and Farley met as waiters in The Berkshires, so serving food was already in their collective DNA. They came to Ptown for a summer, Farley suggested they stay on for the winter and “see what it’s like,” and that was pretty much that. “We fell in love with the small-town aspect, rather than the summer-ness of the place,” says Boland.

Anyone who looks at Far Land now, popular and iconic, and thinks how nice it might be to own a business in town needs to know what the owners went through to get there. It’s no walk in the park! Boland was working as a historic preservation consultant. Farley had been working as a critical care nurse at Mass General “and went right into VNA home health care when I moved here,” he says. “He eventually went back to Northeastern to become a nurse practitioner and then started work at Outer Cape Health Services. “I was still there when we took this on,” he says. “I’d see patients, would leave and come help with the lunch rush, where I’d occasionally see the same patient I’d just been treating. Then I’d put in the dairy order and head back to OCHS. This went on for about 18 months.”

Even before that, there were challenges. “We had to really work on the business plan,” says Farley. “We bank with Seamen’s, and we have to give them credit for making it very challenging—it was to make sure we could make it work. They were behind us 100% but still had to see the proof on the paper.” Boland agrees: “They were making sure we weren’t setting ourselves up to not succeed,” he says. “Their expertise helped us learn how to do it the right way.” Jim laughs. “I heard one of the bank employees say, if they work as hard at the business as they are trying to get the business, they’ll succeed,” he says.

“We closed on the deal on May third and we had to be open by Memorial Day,” says Boland. “That gave us three weeks to remodel and set everything up. It was an intense three weeks! We were fortunate to have family here helping with everything—construction, menu planning, the lot.” Family remains important: in the checkout area, you can see photographs of both men’s mothers. 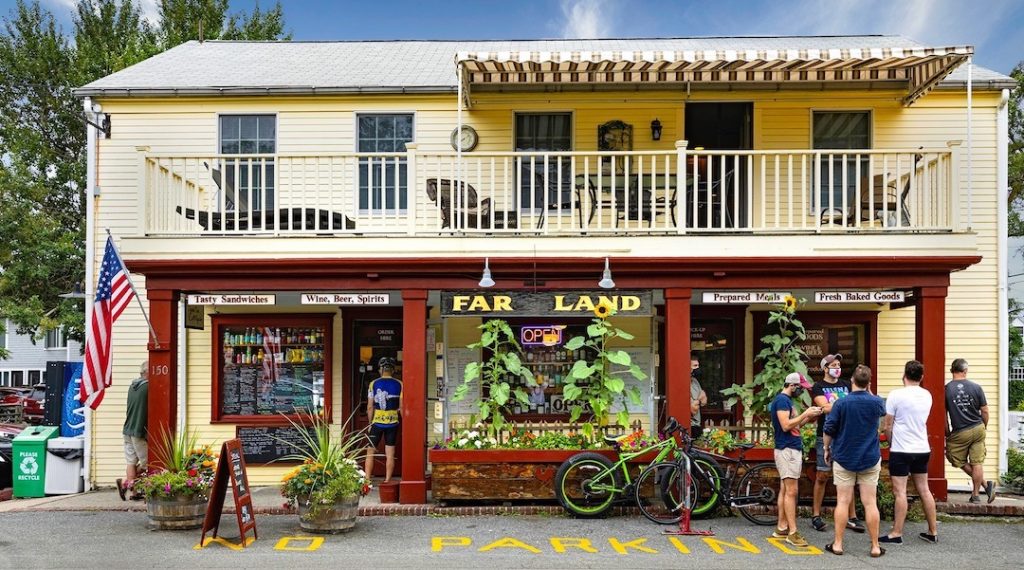 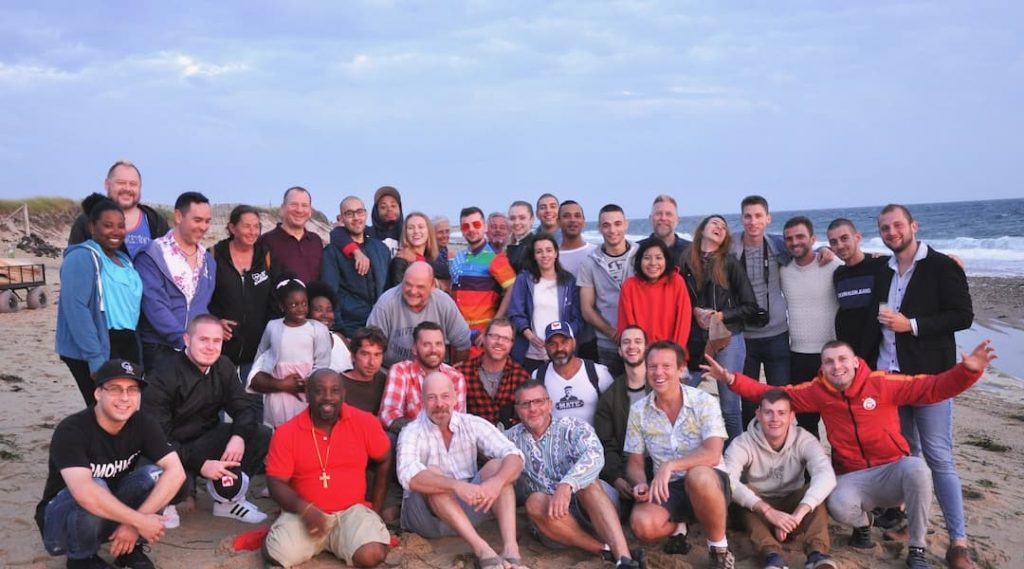 All that hard work certainly paid off. “We wanted it to be the kind of place we’d shop at,” Boland explains. “It’s probably more community-oriented than tourist-oriented, but we didn’t want either/or, we wanted it to be all-inclusive. We wanted it to be what the community wanted it to be. And it’s different things to different people. There’s a strong appeal to the tradespeople, to the artists and writers, they come here for an hour just to see other people. I often think about regular customers who’ve died over the years and I think of those who say the nicest things, give us compliments about how the place made them feel. For a long time there was this older Portuguese woman, she was a daily customer, and one very busy day in the middle of the insanity of July I asked her why she kept coming when it was so crazy in the summer, and she said if I don’t come every day, some day you might not be here for me. That’s the kind of thing that makes it something we want to keep doing.”

What’s their favorite part of Far Land? They’re unanimous: the staff. “We’ve had well over hundreds of employees,” says Farley, staff comprising a balance of J-1 and H-2B visa-holders along with local residents. “And we have this great year-round crew. Trish, the baker, has been with us since the beginning.” They recall a staff death in 2020. “Losing our employee John Perrone to Covid last year brought us all closer together,” Farley says. “We started having Zoom meetings on Saturdays for the two months we were closed during the pandemic. It’s a family.” That’s all part of what makes Far Land, Far Land. “It’s the kind of community where sometimes others take care of you, and then sometimes you rally round them,” says Boland. “That was always our vision. Living here, being part of this kind of community, it’s the way things were when I was growing up. The way things aren’t anymore, most places.”

That’s the community; what about the food? How did they come up with the menu? “Before we opened, we used to go to Hatches Harbor every Sunday,” says Boland. “We’d stop and get things to eat here when it was McNulty’s—and that need we had, for simple, good food, that’s what drove how we structured our lunch and sandwiches-to-go idea. We wanted it to be easy-to-eat foods.”

Farley says, “We started out just with sandwiches, and in fact it wasn’t until the night before we first opened that an employee came up with what to call them! Over time we added hot sandwiches and egg sandwiches, but adding the eggs meant creating a whole new system up front. We never expected to be an early-morning kind of place; that sort of evolved over time.”

“It was never our goal to be culinary envelope-pushers,” says Boland. “We never wanted to be cutting-edge. All we want is to offer the best-quality ingredients and execution. We like making the old standards that people grew up on, done the best way we can.”