Carving the Cape, Bird by Bird 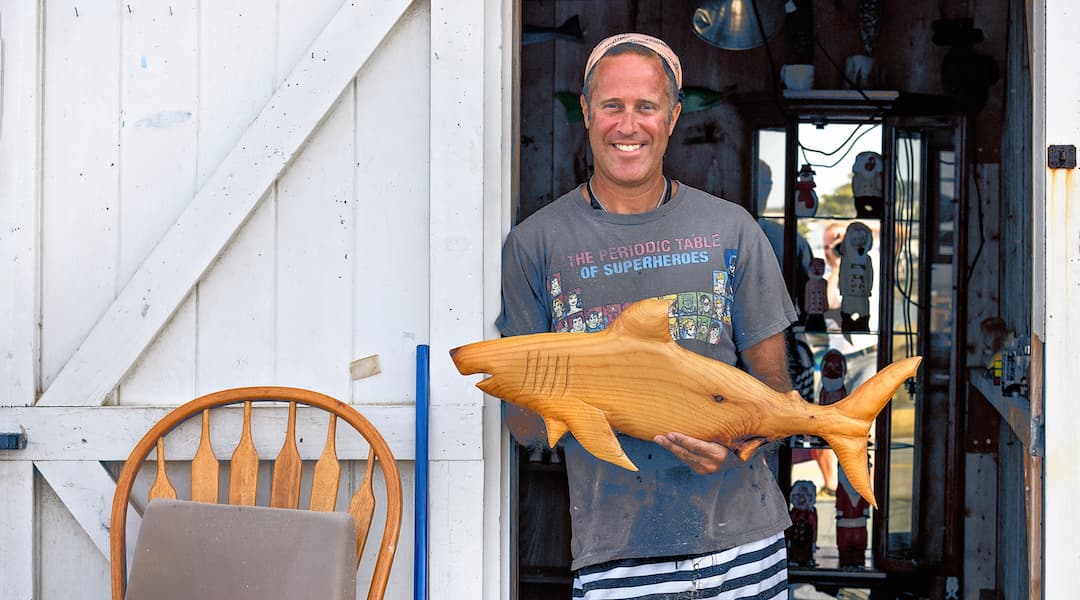 Stroll down MacMillan Pier in the summertime, and one of the first artist trap-sheds you’ll come to features ocean-related wood carvings—gulls, whales, fish, sharks. Look a little closer, and gnomes, Santas, birds of prey, even a flock of barn owls will peer back at you. This is the domain of artist and musician Rob Scott, who sits in front of the shed bringing wood to life, playing his guitar, and really just enjoying his view of the harbor. “Even when I don’t like it,” he confesses, referring to occasional inclement weather on the pier, “I still like it!”

And the pier likes him back. He first rented the shed after a successful show at Spiritus in 2015, and last year’s pandemic distancing regulations forced him to rent double the space he normally would; as a measure of success, “this year,” he says, “I asked for both. There’s no question but being out on the pier’s given me increased confidence.”

Scott went to art school and holds an MFA from Temple University, but his wood-carving expertise is more recent. “Six years ago I was painting houses,” he says. “This client did decoys, and I thought they were interesting. I took a class and twenty minutes in I knew this was it, this was what I was destined to do.” It didn’t happen overnight. “It took me a while to get the carving gesture right,” he admits, demonstrating as his knife moves toward the hand holding the piece of wood. “I was too afraid of cutting myself!”

What he didn’t have was a fear of exposing his work to passers-by. “My grandfather was a salesman for a seed company who painted on weekends,” Scott says. “He was known as a ‘customer’s man,’ and I think I got my customer-service skill set from him.” His repeat clients would certainly agree, and ferry-bound travelers often stop to look—and buy. “I love the interactions on the pier,” he says. “Especially the kids. One went up to my carved figure here and gave it a big hug. That’s so cool.”

But it’s always the creatures he carves that he comes back to. “I’ve been watching this family of Great Blue Herons all summer,” he reports. “Making sketches of them, and of the gulls.” He smiles. “Sometimes I have to look up birds in books, but never the heron. It’s my spirit animal,” he says.

He clearly has a feel for all sorts of animals—whales, birds, even wizened old trolls one might find under a bridge or in a forest… Scott sees the unexpected in the everyday, and his carvings are alive with movement and emotion, the sweep of a wing, the glint of a knowing eye. Working here at Land’s End, he captures the essence of everyone who lives here, whether they wear feathers, fins, or even—as some do—clothes.

A year-round Ptownie, Scott spends his winters working on new creations and fronting—providing vocals and keyboards—for a band. He’s also a regular at the Canteen’s winter holiday market. “I can’t imagine leaving,” he says. “This is definitely home.”

For which Provincetown is profoundly grateful.