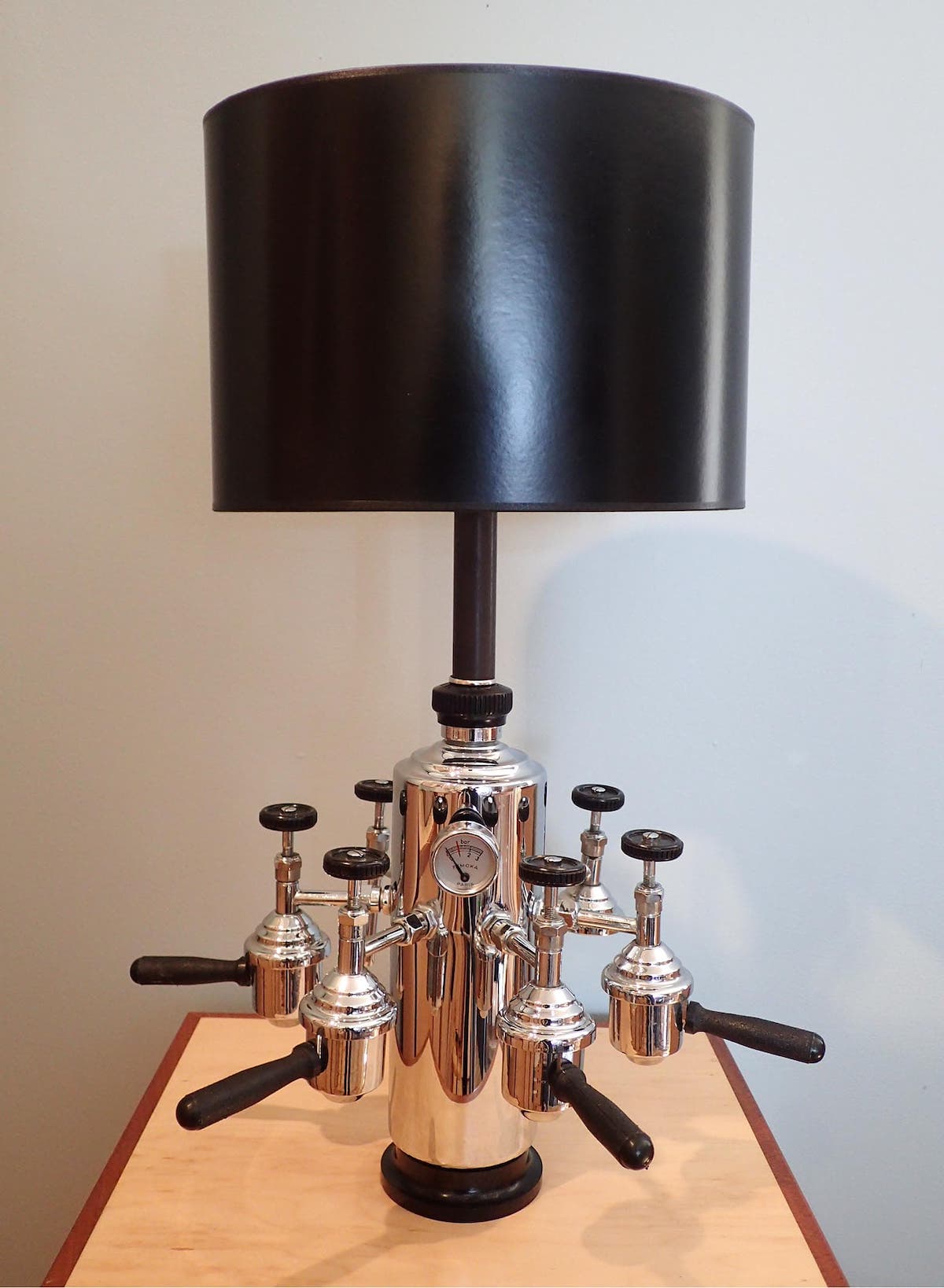 In 2008, then-gallery owner Paul Wisotzky took one look at Jody Johnson’s quirky creations and said, “I want everything you make!”

He wasn’t alone in his reaction; the popularity of Johnson’s work is on the rise. Her one-of-a-kind repurposing of vintage pieces into functional lamps creates a statement in any room and leads to reflection on how we use materials, which design features endure, and how new life can be breathed into old objects.

It’s especially telling that what she creates is light.

Johnson looks for materials everywhere, in thrift stores and estate sales and flea markets. “The beauty is that something starts out as one thing, and ends up being something else,” she says. “I look at all these objects that once meant something to someone, and I don’t want to see them in a landfill.”

She’s had the opportunity to examine how things work. “I was in manufacturing and observed functional equipment,” she says. That background enables her not only to see a piece, but to see through it, to how it could work as a lighting fixture. “Everything I make, I disassemble. I gut the cavity so there are no working parts, just the shell.” And that’s when the artist joins the craftsperson, as Johnson’s vision finds a way to merge with the object’s prior life, to build on it, and together bring something entirely fresh and innovative into being, a unique way of providing and embracing light in the object’s new space.

Johnson worked with Wisotzky until he closed his gallery in 2016 (she is currently represented by Woodman/Shimko in Provincetown). She was a favorite at the Blue Gallery where Wisotzky once wrote that “one of the things I love most about Jody’s work is that when people see it, they instantly smile. Each of the objects she chooses to transform have histories, memories, and associations attached for nearly every person who looks at them.”

She has a specific time period to honor—the 1930s through the 1970s—with the cutoff point being “when things became more plastic and disposable,” says Johnson. Discarded useful pieces become useful once again in her hands. “I don’t want you to see how it’s wired. I want it invisible. I use steel wool to try to bring it back to life—but I don’t want to overdo. I want to keep the charm. It’s not new, and it shouldn’t look new. I love doing the history of the pieces I collect. Often I can find a patent date, and that becomes part of the story.”

That sense of intimacy with her materials makes every creation distinctive and often quirky. “I’d rather not sell something if it doesn’t feel right. I won’t reproduce a piece, either.” She recalls a gallery opening when one of her pieces—a hot orange 70s juicer, transformed into a lighting fixture—caused a bidding war in front of the gallery counter. “They said, ‘I don’t understand. Can’t you just make another one?’” she recalls. Every piece she makes is unique and anything but ordinary, requiring hours of thought along with the physical act of creation, honoring the past while looking to the future. She’s not interested in creating something just for the money.

Johnson has been deliberate about ordering her days to give her that freedom. “I live a modest life,” she says. She used to own a house, struggle with financial obligations. “I had been in the corporate world, but stopped when I got leukemia in 2000,” she says. “And I learned I never wanted to go back. I was a workaholic.” Now? “I’m sober and my recovery space is my studio and my art, spaces of peace and tranquility. Anytime I experience anxiety, I can find solitude and gratitude in my studio. I’m always creating something, even if not for the gallery.”

Ordering her life to emphasize simplicity has been key. Johnson doesn’t own any electronics and doesn’t access the Internet; she has one black-and-white television set and uses a flip phone. “Now I live moderately and am so much happier. It gives me a brand-new life to start every day!”

And just as she daily begins her own “brand-new life,” so too do her pieces, plucked from the past and reminding us of our histories, our memories, and the people and times that influenced and nurtured us. In their new incarnations, they offer both illumination and perspective.

Not a bad second chapter for anything—or anyone.