Napi Van Dereck – The Way It Used To Was 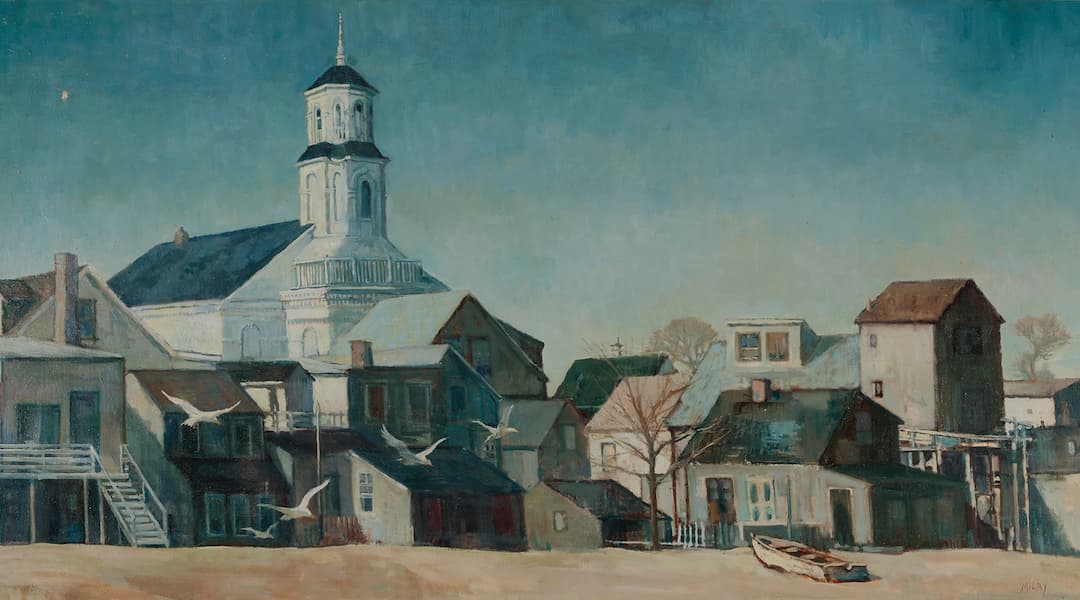 Like his collection of Provincetown art, Anton Napi Van Dereck was a “uniquer.” Although born in Chicago, Napi was conceived in Provincetown on Captain Jack’s Wharf and even bumped into Bette Davis while in his mother’s womb at the Barnstormers’ Theater. Van Dereck was better known by his nickname, Napi, given to him by his grandfather—who said that what the world needed was another Napoleon. His mother wasted no time getting him back to Provincetown that summer of 1932. It is these early memories from his childhood that drew Napi to collecting images of Provincetown “the way it used to was.”

Napi and his wife Helen opened their restaurant in 1975 and first started showing the work of Frank Milby on the walls in the late 70s. This first show sparked Napi’s interest in the idea of collecting art. Napi added a second floor to the restaurant in the mid ’80s and the Eye of Horus Gallery was born. He was fortunate to have shown several artists who were still living at the time, including George Yater, Bruce McKain, and Howard Mitchum. This worked out well for both the artists and Napi’s collection. He often wound up purchasing many of the works rather than returning them to the artists. If he sold a piece, he almost always spent the money he received to buy another work by the same artist.

Napi’s collecting had much less to do with the talent or fame of the artists who painted them as it did with the subject matter. Each piece in his collection tells a story, a piece of his story. Napi described his collecting passion as a “search to gather memories.” Napi managed to acquire several versions of the same subject matter by different artists, such as paintings of Mary Heaton Vorse’s house. These works reveal changes to a large tree in her backyard hit by lightning during the hurricane of 1938. Each painter brought a different perspective and captured the view of her house much differently. The same may be said of other works in the collection depicting the old Cannery Wharf in various states of disrepair including its ultimate demise and both the Oldest Shoppe and the Johnson Street Cold Storage that have long since been demolished.

Napi and Jim Bakker first crossed paths in 1985, when he and Helen ventured across the Sagamore Bridge to attend one of Jim’s auctions in Cambridge. He was surprised and happy to learn that there were other people that actually knew about the Provincetown art colony. At Napi’s request, Jim agreed to conduct the consignment auction for the Provincetown Art Association and Museum in 1988. This was a turning point both for the PAAM auction and the Van Dereck collection. The auction would now limit consignments to works by deceased painters with a connection to Provincetown. Napi now had a wider selection of opportunities to acquire pieces by artists, both known and unknown, forgotten or overlooked. The PAAM auctions helped bring these artists back to the attention of the public, other collectors, and dealers. It was the attention these artists deserved. Prices escalated and bidding wars soon erupted. Business was good at the restaurant, and since Napi had no other vices, he would hold his bidding paddle high in the air until he had won the lots he had come to purchase. He recalled one battle at the annual PAAM consignment auction with Paul Resika over a Charles Turner painting. Paul had exclaimed, “Do you really need to buy everything?” to which Napi replied, “No, just this one!” As the number of artworks grew, it soon became apparent Napi needed to find a focus and control his impulse to buy everything he liked that came his way.

One day Napi received a call from a gentlemen in Pennsylvania offering a group of twelve oils depicting various views of Provincetown by Nancy Ferguson, one of the Philadelphia Ten that summered in Provincetown in the early 20th century, for $100,000. So Napi said, “Nancy who?” and told him he didn’t have that kind of money. A few weeks later, the price dropped to $50,000, but still no deal. A few months later, the gentleman told Napi the estate needed to be closed and asked how much he would be willing to pay. $12,000. Sold.

Blanche Lazzell’s white-line print, “The Pile Driver” and the graphite study for the print provide the anchor for Napi’s extensive Provincetown Printers collection. Also of note are the Gustave Baumann prints he made here before moving to New Mexico. The collection also includes great rarities as the only known white-line print by Reynolds Beal and a rare color print by Boston artist, William Paxton.

It is a difficult task to single out specific works as being more noteworthy than others in order to illustrate the depth and importance of the collection. With over two hundred works in the collection, just like in a puzzle, each piece is equally important. For decades, sharing the collection with the public was always a priority for Napi and Helen. Numerous exhibitions featuring selections from the collection have been mounted at the PAAM, the Pilgrim Monument and Museum, the Cape Cod Museum of Art, and the Cahoon Museum. Individual works from the collection are frequently loaned to museums or featured and illustrated in publications about the Provincetown art colony.

Napi passed away on Christmas day of 2019. Currently 150 artworks are on extended loan as a promised gift to PAAM. The body of work enhances the existing collection, filling in some major gaps and adding a number of new artists including an important oil by Margery Ryerson. Napi shared a common vision for many years that this collection should remain together on permanent display in Provincetown. It was a dream that the collection would also serve as a nucleus to bring other historic pieces back to Provincetown to further document the way “it used to was.”
Categories