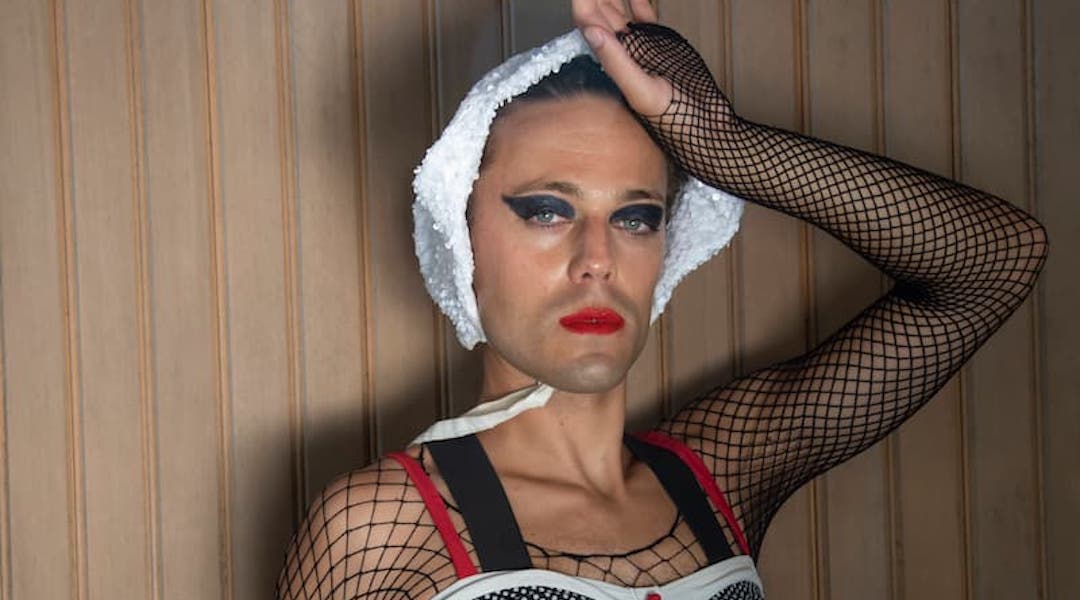 It’s midmorning at the Bas Relief Park. The sound of traffic passing by on Bradford and the distant noise of people on Commercial Street can be heard, but a small group of people pay those distractions no mind, enraptured instead by a sermon of sorts taking place. Standing at the base of 100-year-old giant bronze casting that memorializes the signing of the Mayflower compact stands a 450-year-old woman in a red, white, and blue sequined colonial garb. “I’m here to readjust the stories we tell ourselves, about ourselves,” says Anne Hutchinson with a British lilt to her voice.

Hutchinson was born in England in 1591 and moved to Massachusetts in 1634. She preached fervently, spurned authority, gave birth 16 times, and promoted the role of women in both church and society of the early Massachusetts Bay Colony. She would eventually be banished and found the colony of Rhode Island.

On the hour-long walking tour, the audience is prompted to reexamine the role of colonialism, capitalism, and the pervasive struggle of women and other marginalized groups through the ages. Her ribald comedy and nuanced perspectives are put to good use, giving public history a refreshing jolt of life. 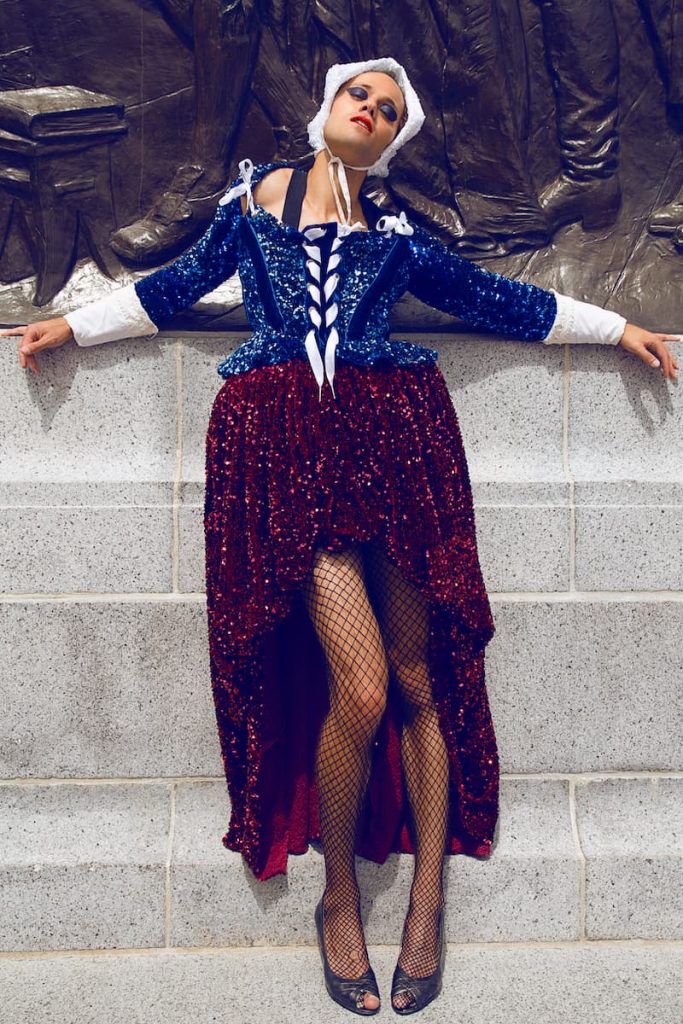 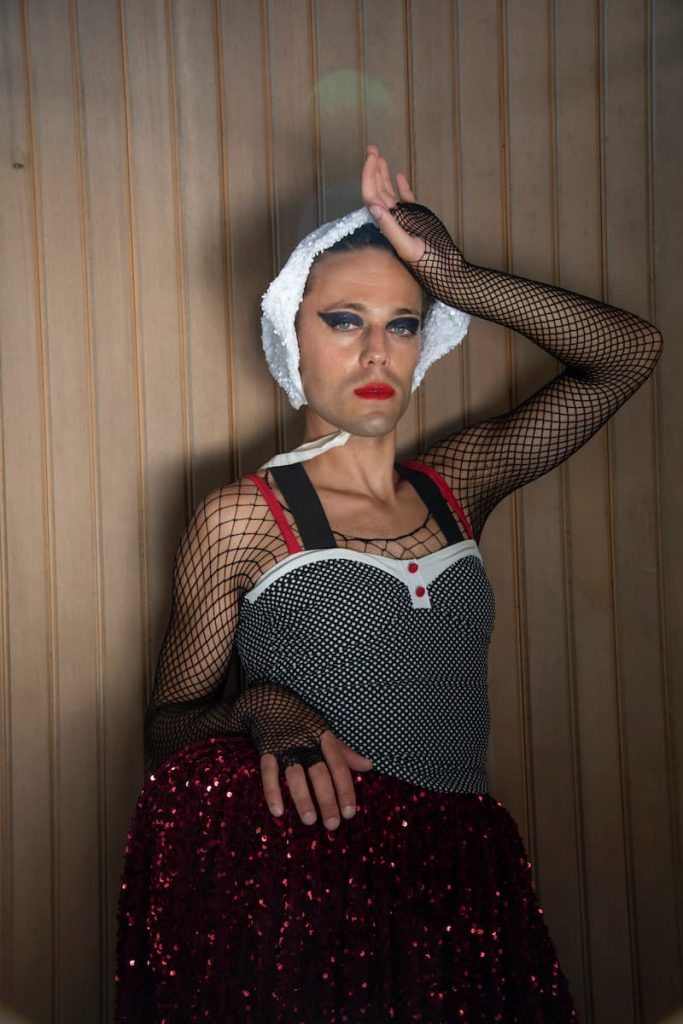 Far from the revisionist history taught in schools, textbooks, and plaques around town, Thomas has spent years researching the “contact period” when societies from different continents began to feel the impact of one another. Without delivering a sanitized or whitewashed version of history, this tour offers a reexamined look at the history of Provincetown. Of Bas Relief Park, Hutchinson quips, “the park was constructed through eminent domain, which means they just took land that wasn’t theirs, which is a wonderfully historically accurate way to celebrate European arrival on the shores of America.”

Thomas’s version of Anne Hutchinson is equal parts wry wit and real history. Potential visitors are warned to “expect the ‘licentiousness and sinful liberty that got Anne banished long ago.” Thomas began the tour in Boston in 2019 but moved to Provincetown during the early days of the COVID-19 pandemic, the impending 400th anniversary of the colonial arrival, and a continuous flow of summer tourism providing the perfect opportunity to present an updated version of history.

“I always thought I would end up in Provincetown but I thought I would be a bit richer and a bit older,” says Thomas, “but I consider myself very lucky to live here now. The fact that there is a gay culture allows me to express and explore an important part of my identity.”

Thomas has found unexpected freedom in the role of Anne Hutchinson. As an outspoken woman in early colonial America, Hutchinson was accused of being a “wife who would rather be a husband.” Just as Hutchinson bent gender norms 400 years ago, Thomas’ tour pokes fun at the gender binary, drawing inspiration from the way that Hutchinson rebelled against colonial and church authority as a template to continue the work of anti-colonialism today. Thomas explains, “the way the world is shaped today is based on what happened during the colonial era. We have a lot of things to fix, and understanding the past is the first step in fixing these things.”Explaining four hundred years of Provincetown history in an hour is an impossible task, but Thomas covers a surprising amount in the time allotted. The tour isn’t all browbeating or an endless recitation of dates and events, either. Instead, he invites the audience to laugh. “People are most comfortable when they’re laughing.” Thomas deftly tosses jokes like stones that topple the long-held narratives of a false version of American history as he smartly navigates the tumultuous waters between gravity and levity, a task that could go terribly wrong, but doesn’t.

The tour smoothly explores everything from whaling, how streets got their names, clubbing, queer culture, and many facts you probably didn’t know. When discussing housing, for instance, you’ll learn how the price of perfume and petroleum affected the housing market, making Provincetown the second-most expensive town per square foot of real estate in all of Massachusetts.

Thomas sees this boom of tourism as a double-edged sword. On one hand, it brings more visitors, which means more tours. On the other hand, it makes finding an affordable place to live very difficult. “I feel extremely lucky to be here and to have found an apartment on Facebook. It’s nerve-wracking, though, when your stability is in somebody else’s hands.”

Thomas is one of the brave souls who has become a year-round resident, a true townie. Of the winter he had only positive things to say. “It’s beautiful and I had a lot of time to work on my projects.” His presence and renewed energy have undoubtedly proved enriching for the town, his costume and confident pageantry a welcome addition to our many-colored quilt.

The Historical Tour of Provincetown is a must for everyone. Tourists will find it a fun introduction, while locals learn a more nuanced history of their hometown. You can sign up for a tour on TripAdvisor where his tour holds a perfect five-star rating, or get in touch with Thomas on Instagram @americanjesabel. Tickets are $20 per adult (like any performer, he appreciates tips), making it an affordable and enthralling addition to your day.