On His Last Night…Nat Turner in Jerusalem 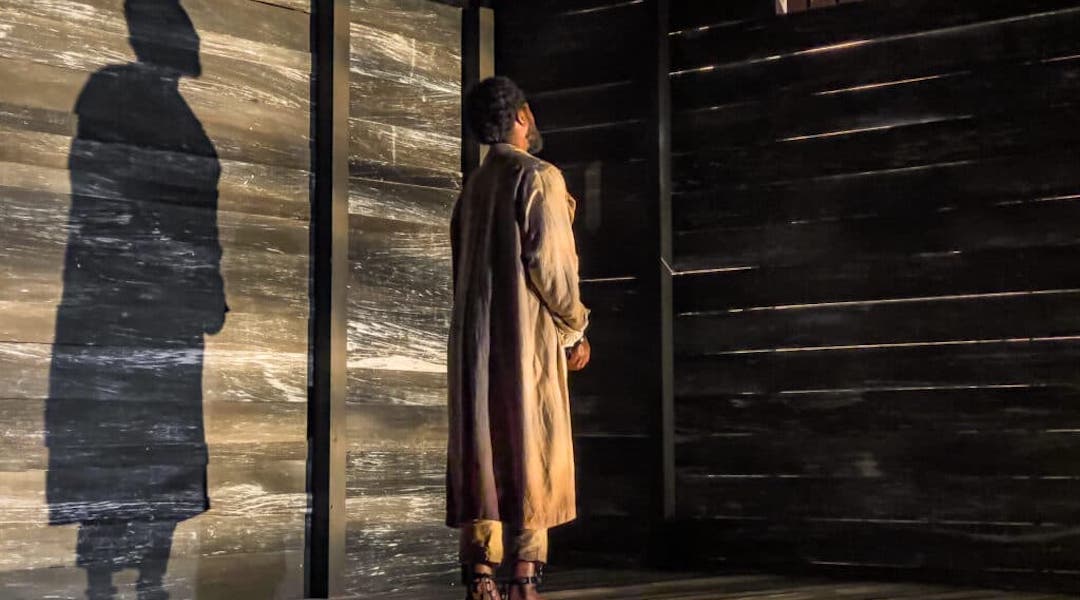 I’ll cut to the chase: go see Nat Turner in Jerusalem at the Wellfleet Harbor Actors Theater. Just go. It may be the best theatre you’ll see this decade.

The time is November 10th into November 11th, 1831, the night before captured runaway slave Nat Turner (brilliantly played by Ricardy Fabre) is to hang for having led a slave rebellion. The place is his cell in a jail in the way-too-presciently named Jerusalem, in Southampton Country, Virginia. The question is what exactly constitutes morality. 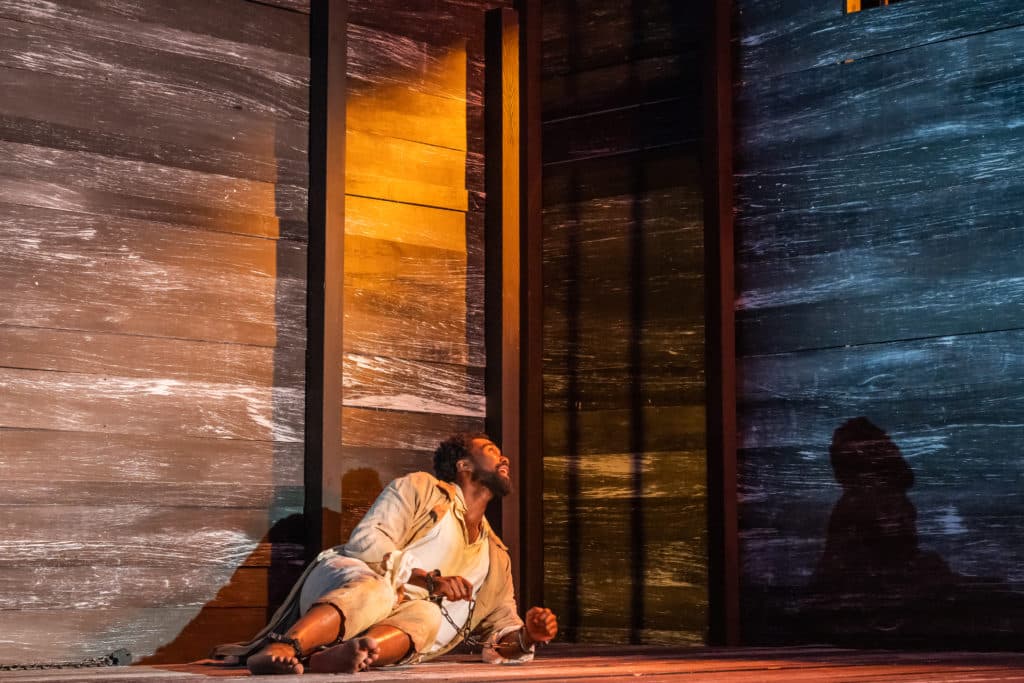 Turner spends the night in conversation with two men: his lawyer Henry Gray, anxious to complete his version of Turner’s confession, and his jailer (both played to perfection by Robert St. Lawrence). He is “a preacher whose congregation is in chains,” whose “insurrection, as you call it, was God’s work.”

Gray is clearly here to exploit Turner, who has already given him the confession he needs; it turns out the lawyer is in debt and anxious to take advantage of his position at the center of the trial of the century by publishing further information. He initially sees Turner as a thing, an object, an entity with no personal agency, something Gray can use to his own ends. But Turner is having none of it: he keeps pushing Gray forward—into compassion, into enlightenment, into thinking with his heart as well as his head. Gray rejects Turner’s fundamental nous, his faith, yet eventually seems to realize that Turner has something he hasn’t—and that it might not be such a bad thing to have.

The nameless jailer, on the other hand, professes himself Christian; his task through this long night is to shackle and unshackle Turner—a strangely intimate gesture—on Gray’s orders but also through his own dawning and reluctant compassion.

All three men are circling around a fundamental issue—what is morality? Turner asserts that he was motivated by God; Gray is struggling to understand the relation between God and violence. “The killing of sleeping people is an act of God?” he finally gasps. “Infants sleeping in their cradles?” Turner, for his part, struggles with the lawyer’s questioning. “What do you think holy vengeance is supposed to look like?” he finally demands. He reminds Gray of the brutalization of native American children. “You are the savages,” he concludes. 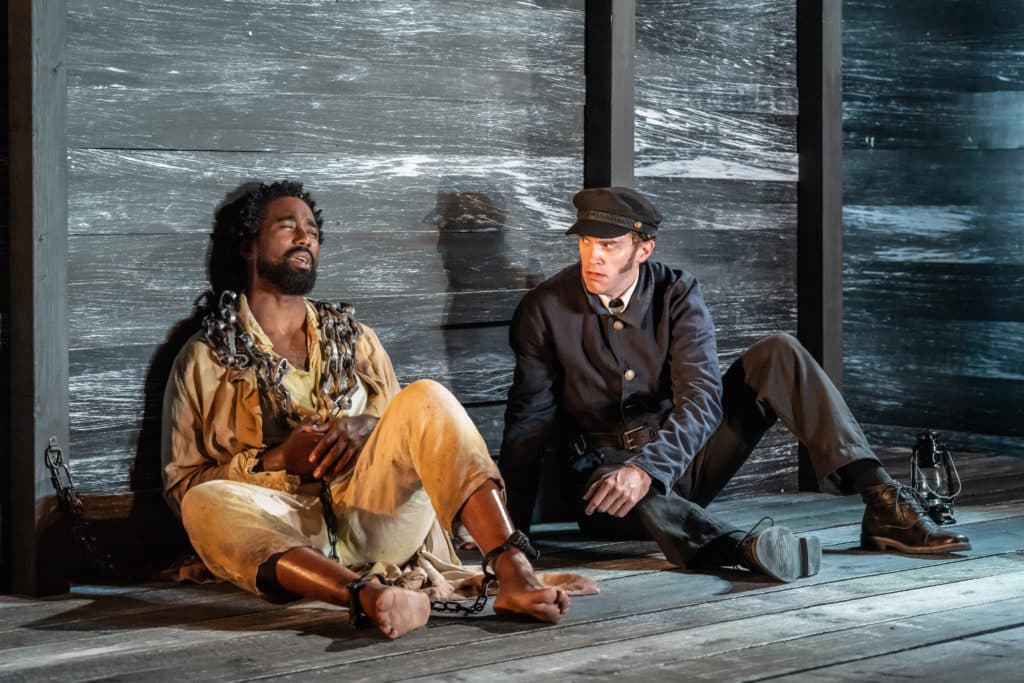 The jailer has his own philosophy. When Turner expresses joy in finding a fellow Christian, the jailer is more impassive. “I think not believing in God,” he says, weighing his words, “is for rich men.” He won’t commit to attending the execution, as his wife doesn’t really enjoy a hanging; it’s unclear whether he finally acceded to Turner’s last wish.

Playwright Nathan Alan Davis has struck just the right notes. Some of his dialogue is lyrical; some of it comes wrapped in a history so painful that audiences might cringe; all of it is thoughtful. WHAT Artistic director Christopher Ostrom’s set is frighteningly real and—perhaps because this is outside—frighteningly close; it’s easy to get caught up in imagining a last night on earth in this bleak cell. Director Rodney Witherspoon II takes that bleakness and infuses it with meaning, the lamp, the walls, the window, the chains, the furniture—everything is more than what it seems. Words have secondary and tertiary meanings; gestures are spare (except for one crowning moment when Turner leaps on a stool to pray) and subdued; Death itself hovers over the stage.

And while there could be accolades for everyone—and there should be—the story wouldn’t have had such a depth of controlled passion without the actors. Fabre’s gentleness does not for one moment make anyone disbelieve he could have led a violent rebellion; and St. Laurence’s tour de force in his dual parts, thanks in no small part to dialect coach Paige O’Connor, is astonishingly good.

“This is now a matter,” Turner warns, “for your silent hours… not mine.”

The Outer Cape has been waiting for live theatre for 16 months. This was well worth the wait.

What actually happened? While Henry Gray did supposedly take down an accurate version of Turner’s “confession,” the narrative inflamed white hysteria, suggesting that the rebellion was the beginning of a violent revolution (and in the play Turner soberly admits, “this was not war; this was warning”). The rebels did kill between 55 and 65 white people, but hundreds of Black people were massacred in the rebellion’s aftermath, following a familiar pattern of white fear of and overreaction to Blacks fighting for their freedom.