Gorgeous and Poignant: Tiny Beautiful Things at the Provincetown Theater

Tiny Beautiful Things doesn’t feel like a standard play (spoiler alert: it isn’t). For one thing, there’s no complex storyline—no plot at all, in fact. With one exception, the characters aren’t fully fleshed out, the audience essentially hears their stories—and then moves on. Despite all of this—or perhaps because of it—this play glows from within with a light that warms more than just the stage.

A woman is asked to take over writing an advice column—for free—and despite having “no money and no time,” she agrees to embody the fictional “Sugar” who is agony aunt to the column’s readers. And what ensues is a series of vignettes of people’s lives as they come and share their deepest troubles anonymously with her… and her thoughtful, caring, and sometimes shocking responses to them. As time goes by a sort of community is created so that by the end her readers are more interested in Sugar herself than in their woes.

At times heartwarming, funny, tragic, horrifying, all of these stories are real, immediate—lived. And kudos to the three actors (Anne Stott, William Mullin, and Tom Sharp) who must inhabit, understand, and express not just one character but many; they all three do so with sensitivity and aplomb. 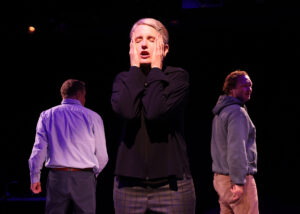 As for Sugar (Sara Fitzpatrick) herself, it’s a demanding, exhausting role; not only does she have the most lines and stories to deliver, she is also the only character the audience grows slowly to really know and understand, as she strips away her own layers, unwrapping them as though peeling an onion, with wry humor and a big dose of self-forgiveness. She looks for all the world like a suburban housewife and mom, which just underlines the hiddenness of her experiences… and, perhaps, all of ours.

Ellen Rousseau has once again struck just the perfect note with her stage set, which is to say making it nearly nonexistent: all we see are the dead branches of wintry trees extending the floor into three dimensions, offering places to stand, sit, move, even lie. That is all that’s there, and that’s all that’s needed. The starkness of the letters, the cris de coeur, are reflected back to both actors and audience though these minimalist surroundings.

And the stories the characters bring to this particular agony aunt—which are apparently true: Cheryl Strayed, the author of the memoir from which the play was adapted, was herself “Sugar” and lived these questions and dilemmas—are both poignant and effective. The ensemble work here is stunning as the letters arrive at breakneck speed, words tumbling over each other as they pour out their pain. And through it all, what really stands out is the level of energy from everyone that’s absolutely unflagging; each new character is well defined in seconds through voice, body, attitude. 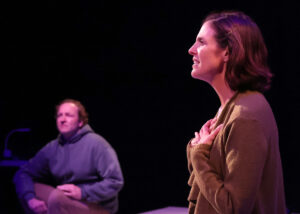 As each new problem presents itself, Sugar reveals more and more about her own past experiences and feelings, relating to what each writer is bringing to her, and offering gentle advice. But as the play moves forward, we realize that much of what she’s revealing is dark indeed, from a messy divorce to a childhood experience of incest, from an abortion to a heroin addiction. And yet what we also see through these anecdotes is her growth as a person, how she was able through it all to eventually become Sugar.

You will find these voices haunting you for days—their pain and growth, a reminder of ways that we can touch each other, even if it’s only through an advice column. It’s a play filled with hope—understanding that the pain and alienation we feel are not ours alone, that there are people out there who don’t just understand, but can relate at the level of the heart.

And heart is what this play is ultimately about. As Sugar herself counsels, “You have to be brave enough to break your own heart.”

Note: Following the matinee performance of Tiny Beautiful Thing on Sunday, November 27, we will host a special post-show conversation with members of the cast and creative team of the production, facilitated by Provincetown Theater Artistic Director, David Drake. Taking questions from the audience, we’ll be looking at the process from “page to stage” in producing a theatrical adaptation of Cheryl Strayed’s bestselling book. Check provincetowntheater.org for details. 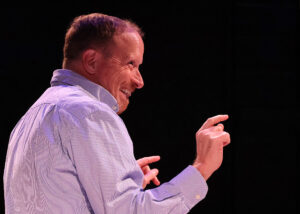