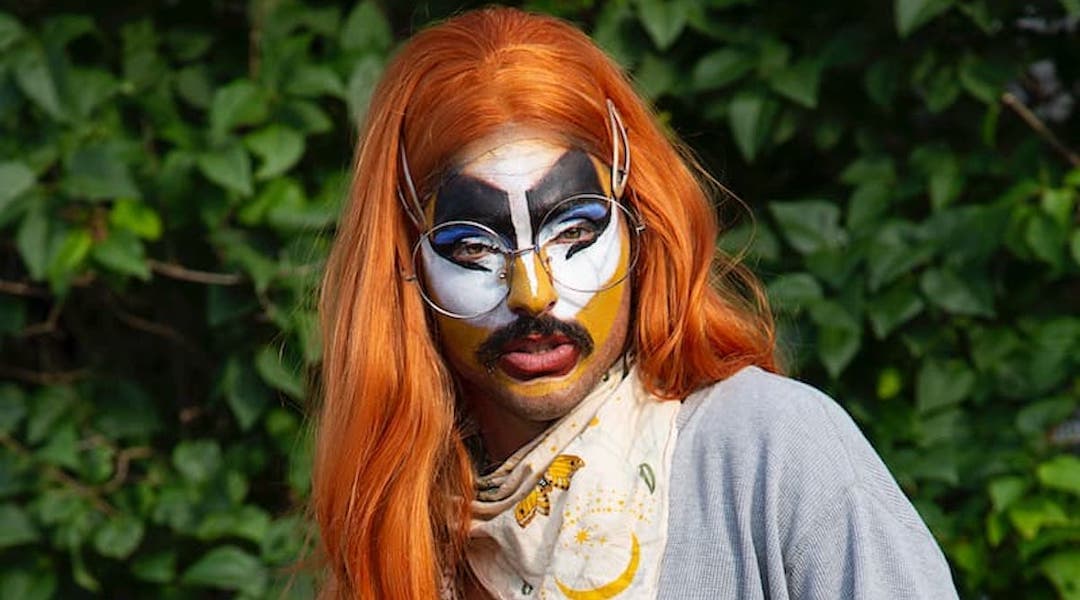 Somewhere between Herring Cove and Race Point is an island called Eggs Isle. The island is populated by all the ugly, poor, interesting but unwealthy people who have been exiled from Provincetown. The little island has no roads or cars to speak of, the houses are made of whatever flotsam arrives on the shores. At least, that’s what Saltine, an Eggs Isle resident, tells people during her live podcast every Wednesday night at 7pm.

There’s an old drag-queen maxim: Paint your face so the back row can see. Saltine, one of Provincetown’s newest and unquestionably interesting drag artists, who performs en plein air with black eyebrows several inches thick, bold colorful contours marking cheeks and nose, has no back row per se and might be attempting to be seen clearly a few blocks away.

Saltine wobbles confidently through the sand outside the Julie Heller Beach Gallery in heels that have seen better days every Wednesday at 7 PM (ish). The audience is comprised of a devoted group of locals and whoever gets cajoled into joining as they walk their dogs on the beach. They sit, stand, crouch, and lean on whatever is available. New guests are advised that the show is BYOC, Bring Your Own Chair.

Saltine reads excerpts from her memoir, recounting the glory days of living in Provincetown on and off since the ’70s. Before moving here, she was a world-renowned art historian, physicist, and former financial advisor to the Ford Administration and—rumor has it—a lover of President Ford himself. Unable to afford the constantly increasing rents of Provincetown, Saltine was banished and now lives in the liminal space between worlds, Eggs Isle.

Each chapter of Saltine’s memoir is recorded to emulate a live radio show, then uploaded online as a podcast. You can catch up on past episodes at eggs-isle.simplecast.com. The chapters wander from topic to topic, densely packed with jokes that you may not fully understand until a few minutes (or a few days) later. Saltine enjoys a good pun, peppering them through the performance or laying the groundwork for minutes, culminating in a triumphant or groan-inducing punchline. 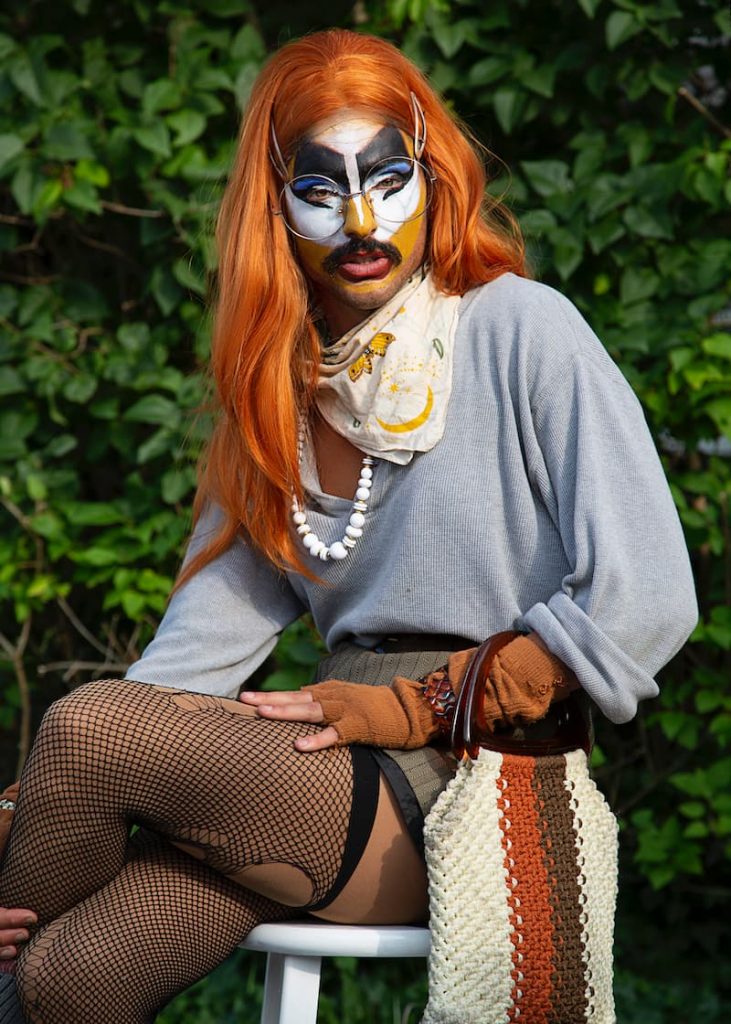 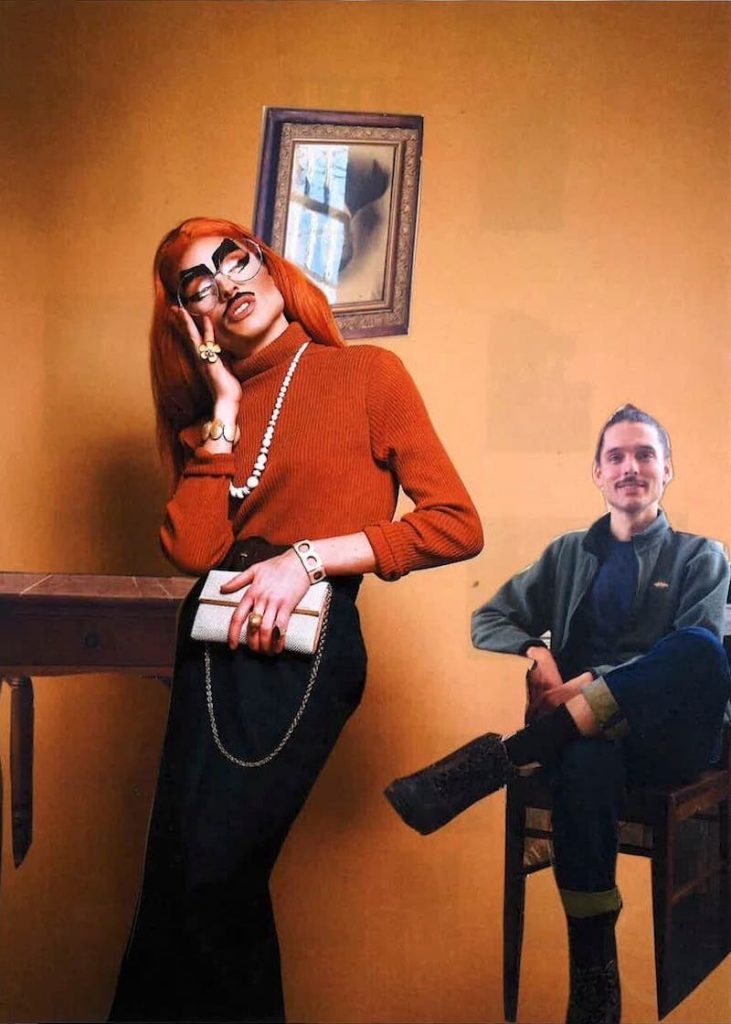 Attending Saltine’s show, you’ll learn that all the businesses you may have loved and the quirky characters in town that mysteriously disappear season to season are alive and well on Eggs Isle. Unreachable by mainlanders and invisible to our sight, a thriving colony of artists, misfits, environmentalists, and outcasts has found a home there. In the center of town, instead of a monument, there stands a giant thermometer that tells just how boring it’s getting back in Provincetown.

The audience gleans even more information about life on the Isle in the second half of the show. Using a few keywords shouted from the crowd, Saltine transforms into a character from Egg’s Isle. Prompted by questions from the audience and off-the-cuff responses that turn into lengthy rants, the pieces of a puzzle begin to fall into place, often bizarrely. Appearances have been made by Patrick Pickle, a set of twins named Rosacea and Iris Butterfinger, Poppy Sunshine, Dingo Illiterate, and many more. Saltine’s quick wit is put on full display as she becomes the character, inventing elaborate backstories, and maintaining an efficient Q and A with the audience. Memories on Eggs Isle will continue every Wednesday through the winter, staying outside as long as the weather holds before migrating indoors.

In an odd coincidence, Saltine has a godson who lives in Provincetown. Cody Sullivan, 29, came to Provincetown quite by accident. He visited one day in the late summer of 2019 and instantly fell in love with the geography, the town’s easy access to both nature and queer culture, and thriving art scene. After hearing a rumor about some winter housing in the East End, he promised himself, “If they have a good art section at the library, I’ll stay.” The art section must have been adequate, as he’s been here ever since. He tried to escape a few times, but the magnetic pull of Provincetown proved to be too powerful.

Like most young people, Sullivan wears many hats. During the day he works for a local landscaping company. In his free time, Sullivan is a consummate painter, passionate actor, and dedicated writer. Following in the sandy heel-print of his godmother Saltine, over the summer Sullivan performed a one-person show, Town Meeting, at Camp Provincetown in which he played every character in the Provincetown town meeting as they discuss mask mandates, compost buckets, and housing. His performance cascaded through characters who jeer, laugh, and fight with each other, bending the rules and structures of a traditional drama, wandering through the audience, breaking the fourth wall, improvising lightly.

Sullivan uses humor and fiction as tools to cast light on the plight of local artists, young people, and the non-millionaires trying to live here. He draws inspiration from the legions of artists that have enjoyed Provincetown but worries about a future when there is no room left for artists or space for diverse and interesting performances. “There are no affordable queer places to live anymore,” he remarks. “And bohemian artists’ communities no longer exist, even staying in a dune shack has become a bureaucratic process.”

Despite the challenges, Sullivan has found solace and support throughout Provincetown’s community. “It was a very Massachusetts welcome. It was icy at first and I had to prove myself a bit, but once I showed a willingness to stay, doors began to open for me. I’ve found a lot of support for my art here.”

Sullivan doesn’t limit himself to live performances. During the long and quiet winter, he wrote a book called Mal & Rue. He has begun releasing it chapter by chapter in a serialization, much like the style of Dickens. If you live in town, you can have it delivered to your mailbox. For an extra fee, he’ll mail it to you. Sign up at saltineandsullivan.com.

Audiences seeking interesting art are advised to keep their eyes peeled for the thought-provoking work of both Saltine and Sullivan. Sullivan will debut a new play this fall while Saltine will continue to provide fresh and interesting monologues for the foreseeable future. For more information about both Saltine and Sullivan, be sure to check out https://saltineandsullivan.com/ for updates and future show dates.