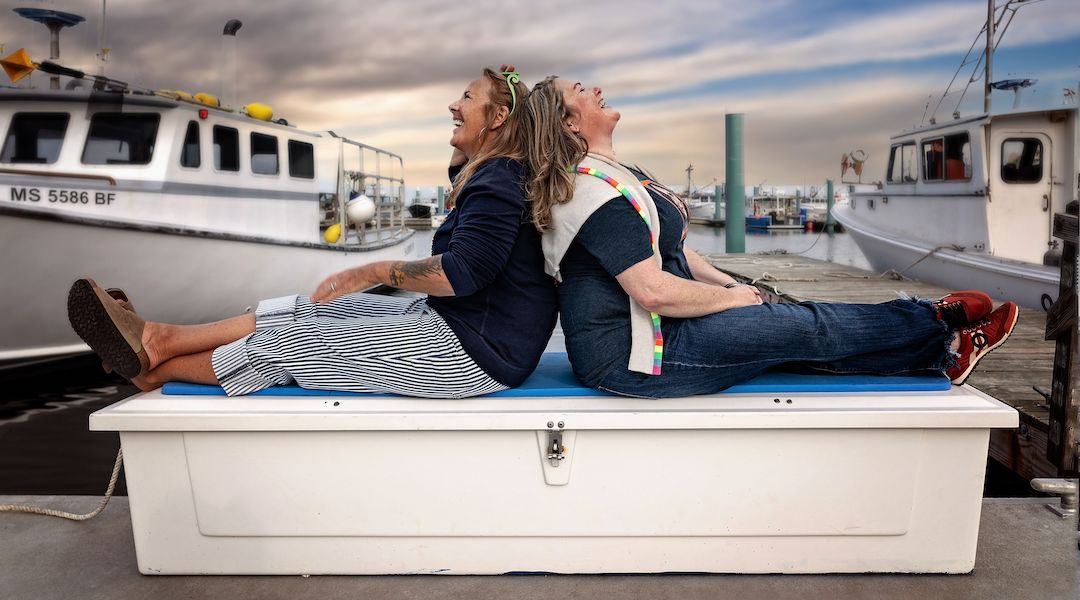 Womencrafts was born in 1976 at about the same time as other bookshops, music festivals, and spots apart carved out from second-wave feminism. We were lesbian separatists. The world didn’t include us, notice us, or make space safe for us—so we created a world of our own. The shop has experienced 45 years of coming-out stories, fostered the sense of coming home, and was for decades, a stamp on every dyke’s passport. Our mission through the years has been simple: showcase under-represented female artists, authors, musicians, and the issues most pertinent to women. Our mission hasn’t diminished over the years, but our response and awareness to changes in culture, have. Just as the shop is not how it was at our inception, it also won’t be the same next year. We have evolved and changed imperfectly, and our learning is continuous.

Unlike others who disappeared since the 1970s, we are decidedly anti-TERF (Trans Exclusionary Radical Feminist). There is a loss of lesbian space all over the world, yet we are doing a disservice to our values if we exclude our trans- and non-binary siblings in the same ways we were left out of the women’s movement.

Trans rights are a feminist issue. The safety of any sister (not just cister) is everyone’s responsibility, and the violence against trans women is born of the same misogyny that keeps all women and queer people unsafe. The journey of a young trans man who grew up in the lesbian community is not a threat to us; it’s rather a celebration of the living authentically in one’s body.

One moment of growth for me was when I hosted a Feminist Fight Club, modeled after a tongue-in-cheek book the shop carried. I shared the joke rules of FFC online, and received the ire of social justice warriors who noticed “members promise to vagfirm one another.” It was rightly pointed out that not all women have vaginas. My first instinct was to delete the thread. In an effort to share my process, I responded that I looked forward to the day when the affirmation of my vagina neither diminished nor dismissed anyone else’s body or lived experience. If you’ve followed Womencrafts’ social media this year, you’d know my vagina has a lot to say after a lifetime of endometriosis and sexual trauma. Not all women have vaginas, but that doesn’t mean we need less space to talk about them—we need more and varied platforms for all bodies.

There is a “trans ally” sticker on the door, but I’m very aware that saying something does not necessarily make it so. Please judge me by my actions, not my intentions, and allow me to admit when I’ve made a mistake. That one small effort issued an invitation to shoppers to participate in conversation and ask questions. The fear that we may be hateful or ignorant is, I hope, assuaged by the fact that we have affirmative signage, stickers, pins, pottery, and a dedicated shelf of trans literature, history, erotica, and information for parents and friends.

In a recent exercise in self-evaluation, I recognized that just carrying books written by women did not make us diverse. In fact, if the one criterion was being a woman, the progressive work of varied voices was lost to the majority within the minority. We could no longer rest on our laurels of being feminist; it was clear we inadvertently represented white feminism. There was shame in that realization and how underrepresented some Womencrafts shoppers may have felt over the years. In the last several years we have been dedicated to carrying, displaying, and recommending books written by women of color. This year, after doing some anti-racism work, I set an accountability goal and have committed to purchasing at least 50% of new titles written by women of color.

As we have evolved with the times and the community, one thing has remained stable: the responses of men to the shop. Our name and the sign that displays it engender a visceral, angry, confrontational response on a daily basis. Feel free to come sit on my steps if you don’t believe me. “Womencrafts, est. 1976.” What in that name elicits such responses? I acknowledge our origin is in separatism, but that was 40 years ago; men have always been welcome here—just not coddled. The shop is designed to encourage all people to make the world more just and equitable. We are a protest against, and a response to, misogyny. Unless you’re committed to upholding systems that are racist, sexist, ableist, and homophobic then what we’re doing here shouldn’t be a threat.

The shop is clearly a representation of my otherness—being a woman and a lesbian. It is my work to acknowledge there is still privilege there, predominantly in my skin color. My colleagues from PLOVR display feminism in their structure, mission, and actions. Our shared brand of feminism is intersectional, and if yours is too, I’d love to meet you at the intersection of Commercial and Pearl.