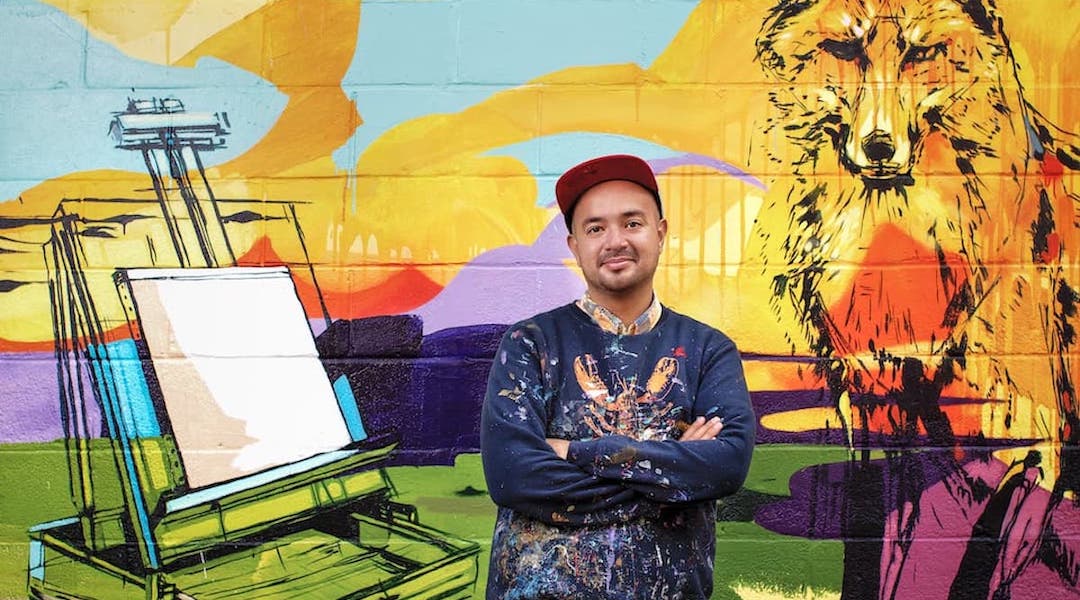 Time and the Town

In Time and the Town, Esteban del Valle’s mural about Provincetown, occupying one outer wall of Marine Specialties on Commercial Street, it’s all about hidden and not-so-hidden meanings. Everything here is a metaphor for something else.

“I’d been having these conversations with Sam Tager,” says Valle. “There was a fox den at the end of the alley, and after that, everywhere I went, I noticed the foxes. It was amazing! Sam told me about this experiment in domesticating foxes. Those who live in urban areas actually experience physical changes, they develop smaller brains, shorter snouts. In some ways, they become something like traditional dogs… but never quite. They never cross over. They always stay a little wild, even living in proximity to humans. So I took that metaphor, the metaphor of the fox that’s always a little wild at heart. And at the beginning of the mural, we see different people passing through town, with the fox metaphor at its core the ongoing struggle with tourism and development.

In a similar way, the dune shack became a stand-in for the history of housing in Ptown. “I want you to think about shortage, about exclusivity, about who and where and when gets to be here.” The dune shack also provides a link to the land and to artists who lived lightly on it. “The main is a feast in a dune shack that can barely contain them. There’s a fox on roof working on repairs. To the left is a server and fisherman and a line of people. Everyone’s waiting their turn to get into the small building. You can see the Mayflower on the horizon and a wild fox near an abandoned plein-air easel (was the artist eaten? is the fox the artist?) I want you to question: where is the creative spirit? Is there an exchange? Has it disappeared?” The question is very complicated, both for the artist and for the viewer.

“The cormorant on the easel is an homage to artist Pat de Groot—she used to do cormorants in black sharpie, and she taught me a lot about connections,” says Del Valle. “That canvas is my canvas, and every time I come back to town, I’ll repaint what’s there. The mural will keep changing.” He pauses. “Just like life!”