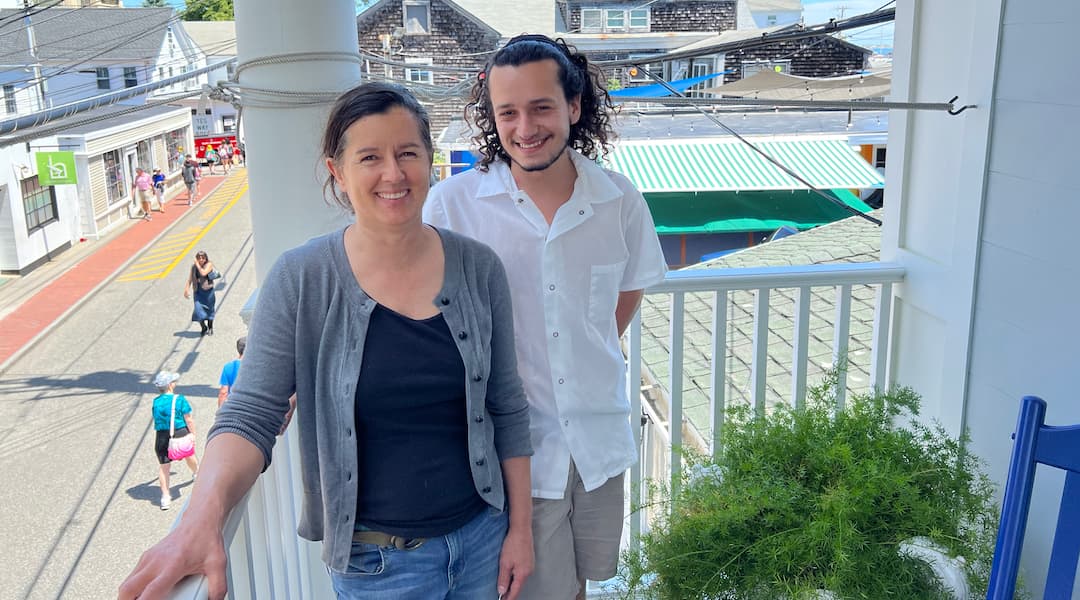 Raina Stefani grew up in Provincetown; she’s fourth-generation Portuguese on her mother’s side, while her paternal grandfather was from Venice, Italy. “Both of these cultures were very family-oriented,” Stefani remembers, “and therefore food played a central part in my upbringing.”

Provincetown itself added to this background: in the 1960s, the Portuguese still dominated the town, fishing in local waters rich with sea life. Stafani’s grandfather Herman Tasha was a fisherman, a hunter, and an artist, while her grandmother Sunny Tasha came from Pennsylvania hill country and was also an artist well-versed in hunting and farming. They were able to weather the late 1930s and early 1940s, which were hard years in Provincetown. Thanks to their connection to both the land and the sea, they carved out a life and endured the lean years.

“During my childhood, the streets were alive with artists and art,” Stefani remembers. “The wharf teemed with fishing boats—and the sea with abundance—and we spent our days sailing at the West End Racing club or exploring the beach as our playground or spending time at our dune shack. After college when I returned to Provincetown, it was a natural progression for me to combine those two loves: creativity and local food.”

Her first restaurant was Café Express, located across from the post office, part of the New Art Cinema complex. It was a tiny café that served espresso (coffee was not a “thing” yet in the US in 1988!) and homemade soups and salads and sandwiches. “They were all super-healthy Enchanted Broccoli Forest-cookbook style,” Stefani remembers. “My mother baked no-sugar, no-gluten offerings during the AIDS crisis. It was a very social, town-centered gathering place for many wonderful people.”

In 1993 she passed the café on to her mother and created Terra Luna restaurant in North Truro. “I was the chef of the dinner service and my brother Nicco and his then-wife Genevieve Morin ran the breakfast service,” she recalls. “They moved on to run the what’s become the Blackfish Restaurant—and I ran Terra Luna until 2010 when I passed the baton to my longtime sous-chef Tony Pasquale, who still runs it today.”

In 2016 Stefani was head chef at Spindler’s during the restaurant’s first year. “I had the good fortune to work with Barbara Lynch and her amazing team, and then my dear friend Liam Luttrel moved back to the Cape to take over the helm there.” The following year she started Baie Bar Resto in a tiny outdoor second-floor spot that had seen a succession of other restaurants: Café Crudité, Tiny’s, and Ceraldi’s.

“Baie was unlike any restaurant experience I have ever had,” she says, “in part because it was so small and intimate, with an open kitchen that fostered an honesty of intent.” A friend made the brass bar for the restaurant and people could sit at the bar and look out at the bay. “There were seats on the railing that overlooked Commercial Street and four table tops under the canopy. Our menu was small and eclectic because we wanted everyone to feel the ease of ordering just a snack or a more composed meal. The cuisine was global and playful and comforting all at once. We only served organic and biodynamic and sustainable wine, and had a small thoughtful craft-cocktail list.”

Stefani is nostalgic about Baie. “We had the most extraordinary three years there, connecting and sharing and feeding so many wonderful people, who like us, wanted to be among friends, sharing a slice of space and time, enjoying the summer nights air, watching the colors change on the water, hearing the faint music of a happy Commercial Street.”

“As clients climbed the stairs to join us, we would meet at the door and nod in silent recognition of one another, as like-minded souls. And in an unspoken agreement we said yes! we are the same, we share this town, we know its riches and we are all so lucky for it. That was the magic of Baie.”

It is a magical background indeed, and one she brings with her now to Commercial Street once again as the Crown & Anchor welcomes her as its new head chef!