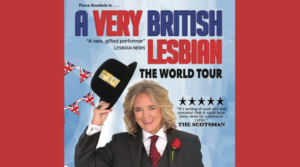 A solo play about saving one’s own life. Fiona Goodwin is an L.A.-based comic who is also very British! Her show “A Very british lesbian” received a five star review at the Edinburgh festival 2019. It tells the story of how, after a failed Linda Blair-style exorcism, she trained as a nun then ran away to Hollywood to do stand-up comedy. Staying in the closet/convent was no longer an optionas she had urges that involve rescuing pretty maidens. You have been invited to her hilarious, poignant, coming out party at Women’s Week 2022. Fiona has a thriving psychotherapy practice and during Covid she wrote the book of the same name.